Note:  The Jets lost again last night.  They will hit the ice at the MTS Centre for practice today as they get ready for a last game against the Coyotes on Tuesday night here in Winnipeg before the All Star break.  We should get word about the status of Mathieu Perreault who left the game last night and didn’t return due to a lower body injury he sustained in the 1st period.

Note II:  The Moose dropped their second straight game in as many days to the Stockton Heat.  Last night they dropped the contest in OT.  They now head south to Bakersfield to take on the Condors starting with a game on Tuesday and another on Friday.

Winnipeg Free Press:  Jets feel the heat in loss to Devils.  (Paywall).  Starts with a look at the current picture, the horror of the offence, injury switcharoo, no laughing matter, special teams and where do they go from here?

Winnipeg Sun:  Playoff hopes crashing.  The playoff line which looked remote yesterday got even father away after the Jets fell flat against the Devils.

Winnipeg Sun:  Former Jet Stempniak flourishing after making deal with Devils.  And this article was written before he scored two goals against his former team. 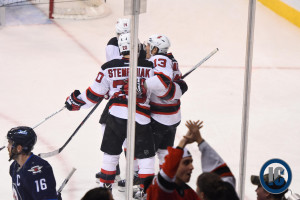 CBC:  Jets miss on Stempniak on full display of late.  He has been a player many have pointed to all season long as one that should have been retained.  And many were repeating that line over and over again when he managed to drive two daggers into these Jets.

Sportsnet:  Headlines.  (Video).  Starts at 1:11 about the Jets making a serious push to sign Byfuglien despite the fact that quite a few teams would like him as a rental.  And last night we saw the power of #33 in front of the net on the power play. 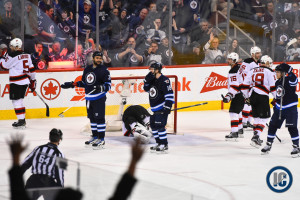