Note:  Huge game for the Jets as they try to move within one point of the Predators.  Nashville has only won once in their last seven games.  Puck drops tonight at the MTS Centre at 7 pm.  As always stay tuned to illegalcurve.com and our social media including Twitter| Facebook | Instagram for pre and post game news.

Winnipeg Free Press:  Pavelec taking comeback slow and steady.  That’s how you win the race and the fact is when you have a goalie playing like Hellebuyck there is no need to rush Pavelec back and risk potential set backs.

Winnipeg Free Press:  Jets know game vs. Preds crucial to bottom line.  Based on how the last couple of playoffs spots are playing out tonight isn’t a must win game but it is getting pretty, pretty, pretty close to that point.

Winnipeg Free Press:  Jets front office has seen all it needs to plot future course.  Plenty in this column from Ed as he talks about the many options in front of Kevin Cheveldayoff and company.  Also includes five more topics including: 1) Hellebuyck in Calder discussion. 2) Thomas Raffl. 3) Comparing Jets and Hawks. 4) What to do when Pavelec is healthy? and 5) Kyle Connor in Hobey Baker discussion. 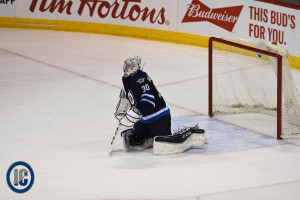 Winnipeg Free Press:  Injuries continue to plague Jets, but Burmistrov may be cleared to play.  The list of walking wounded (or hobbling wounded) remains quite significant as major pieces of the puzzle continue to remain on the shelf.

Winnipeg Sun:  Blue-Chip guest for 60th annual dinner.  We have attended the dinner the last few years and it is usually quite an interesting evening.  This year you will get a Jets perspective with team co-owner Mark Chipman and voice of the Jets Dennis Beyak doing a question and answer session.

Winnipeg Sun:  Jets prepare for another must-win vs. Preds.  As I said in the note above the Jets could close to within one point of Nashville which would still leave them on the outside of the playoffs.  Dropping to five points back is a poor alternative.

The Hockey News: Byfuglien and Ladd draw trade interest as Jets struggle to gain ground in standings.  Taking a look at some of the rumours surrounding the Jets duo.

Illegal Curve:  Coach Maurice scrum.  Update on Burmistrov.  Having seen the Predators three times in last three weeks.  Some lingering grudges?  What have the injuries done to how he is rolling the lines?  Does the 2nd line have a new role?  Update on the guys on IR.  Is Pavelec’s time frame becoming clearer?  Getting impatient?  How much is he watching what Chicago is doing?  Thoughts on Andrew Copp.

Press-Enterprise:  Horvat goals boost Ontario past Manitoba.  Not a great start to the California leg of the road trip.