Note:  The Jets will try and salvage the final game of this home stand before they head to Minnesota to take on the Wild tomorrow night.  Of course prior to hitting the road for a single away contest they have a big game against a Predators team here in Winnipeg this evening.  Puck drops at MTS Centre at 7 pm.  As always stay tuned to illegalcurve.com and our social media including Twitter| Facebook | Instagram for pre and post game news.

Winnipeg Free Press:  Referee got it right when he nixed Wheeler goal.  While Jets fans hated the call former NHL referee used his C’mon Ref column yesterday to confirm that it was the correct call.  Tim writes about the controversial call and why it was the correct one.

Winnipeg Free Press:  Jets need to do some soul-searching: Wheeler.  When #26 speaks you rarely don’t get an interesting soundbite and yesterday he was pretty insightful as he spoke about what this team needs to get done so they can get the season back on track. 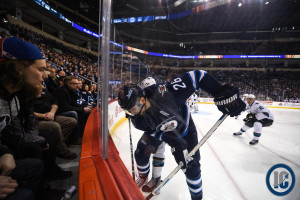 Winnipeg Sun:  Wheeler says Jets’ commitment lacking.  The frustration was palpable in our scrum yesterday as you got the sense that he would like nothing better than to be talking about his team’s collective success rather than answering for the collective failure of the squad.

Illegal Curve:  Tyler Myers fined $5,000.00 for cross check.  While some thought the five minutes and a game misconduct was sufficient the NHL decided to add some monetary amount to the action by big #57.

TSN 1290 Winnipeg:  Hustler and Lawless.  Trevor Kidd joins the guys to discuss the Winnipeg Jets’ form after a couple of disappointing performances at home.

TSN 1290 Winnipeg:  Hustler and Lawless.  Hockey insider Darren Dreger discusses the Andrew Ladd and Dustin Byfuglien contract talks set against the Winnipeg Jets mediocre season. Dreger says he would be surprised if the contract talks were affecting the team.

Illegal Curve:  Coach Maurice scrum.  Scheifele news?  Can he clarify his comments from post-game?  Is he leaning towards kind words or harsh words for the team? On Blake Wheeler’s comments today about the “emotional investment”.  Did this team have more of this last year?  How much is on him vs on the team?  Only being four points back of the Predators.  On the Preds new addition.  Can he share his chat with Blake Wheeler from centre ice?

Cleveland.com:  Lake Erie Monsters blanked by Manitoba Moose, 4-0.  Read about the game from an opposition paper.