Note:  One of the most anticipated games of the season is finally here.  Former Jets Evander Kane and Zach Bogosian will be at the MTS Centre this afternoon wearing the Buffalo Sabres colours as they take on their former Jets teammates.  Puck drops at 2 pm.  As always stay tuned to illegalcurve.com and our social media including Twitter| Facebook | Instagram for pre and post game news.

Winnipeg Free Press:  Scheifele doesn’t practise, game status shaky.  (Paywall).  Lost in all the hoopla of the return of the former Jets is the fact that #55 didn’t practice on Saturday and is a game time decision today.

Winnipeg Free Press:  It’s not just another game for Kane, despite his insistence it is.  (Paywall).  From before puck drop until the final buzzer you can expect tomorrow to be anything but normal.

Winnipeg Free Press:  Kane’s return has Jets shrugging shoulders.  (Paywall).  Not surprising that the players weren’t prepared to give any bulletin board material to their opposition.

Winnipeg Sun:  Jets ready for Kane-mania.  Plenty in this article including 1) Kane still making news 2) Trade requests 3) Track Suit, anyone? 4) Side benefit 5) The ‘other guys’ and 6)  Scheifele out?

Winnipeg Sun:  Kane has something to prove.  He may not have said much that caused anyone to raise an eyebrow in his media scrum but the comments by his coach are telling about how much this game means to the former Jet.

Buffalo News:  Reunion’s all business for Stafford, Myers.  Lost in the hoopla is the fact that the two current Jets will be facing their old team for the first time. 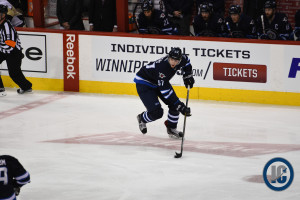 Buffalo News:  Kane does his best to downplay Winnipeg return.  Read about the return of Evander Kane from an opposition beat writer.

The Hockey News:  Capitals, Panthers, and Stars could be fits for Byfuglien.  Just a roundup of some of the rumoured places that could be a home for big #33 if he doesn’t get signed by Winnipeg.

Illegal Curve:  Buffalo Sabres Zach Bogosian and Evander Kane scrums.  Hear from the two former Jets as they spoke to media following the skate on Saturday at the MTS Centre.

Illegal Curve:  Coach Maurice scrum.  Update on the status of Scheifele and Burmistrov.  Using the home stretch to their benefit.  Energy will be the only difference?  How does he expect the dynamic of players facing Kane/Bogosian?  Appreciate that the fans will have some fun with this game?  Update on Pavelec.  Can he narrow down Pavelev’s timeline?  Scheifele’s injury.

Winnipeg Free Press:  Moose no match for Marlies.  (Paywall).  And that was a Toronto team without their big firepower.