Note:  Just like Thursday we are in for a Jets and Moose double feature.  The Moose kick the day off with a tough contest against the Grand Rapids Griffins starting at 2 pm at the MTS Centre (It is also the Connor Hellebuyck mini bobble head game for the first 3000 fans).  While the Jets won’t be playing until 8 pm central time in Anaheim, as they look to build on the success of their first win of 2016  last night in San Jose.

Winnipeg Free Press:  Special teams bite Sharks. (Paywall).  Starting with a short handed goal and then adding a power play goal it had to be nice for the team to finally put the special in special teams.

Winnipeg Free Press: Thou shalt not take stupid penalties. (Paywall).  For the most part in the game last night the Jets adhered to the policy of discipline.

Winnipeg Free Press:  Isles’ Hamonic one step further from becoming a Jet.  (Paywall).  While there was plenty of buzz when it was first announced that the Manitoban was seeking to come closer to home the injury to Boychuk makes it unlikely that is happening this season.

Winnipeg Sun:  Jets tank Sharks.  Coach Maurice had to be happy that his team’s play was finally rewarded with two points.  Ken breaks down the game in this column.

Winnipeg Sun:  Wheeler has elevated his game, among tops in NHL.  He added points 400 and 401 (both assists) last night (game #571 of his career).  He is not the type of player who worries about points although he has consistently produced for this team, especially this season where he has produced more than a point per game. 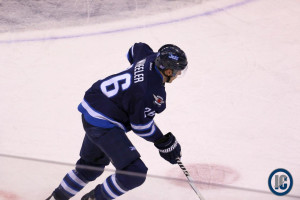 San Jose Mercury News:  Sharks beaten at home again by Jets.  The Sharks held an unfortunate record of 0-10 at home when scored against first and that continued last night as a Drew Stafford shorthanded goal was the first one of the game and made that record 0-11.  Read about the game from an opposition beat writer.

Sportsnet:  Little heads off after head shot from Pavelski.  (Video).  What did you think of the hit?

Sportsnet:  Winnipeg could get an outdoor game in December 2016.  If fans are lucky the weather in 2016 will be similar to 2015 and they can practically wear t-shirts (exaggeration) to the game. 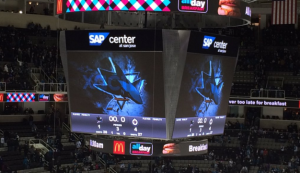 Illegal Curve:  Coach Maurice post-game scrum.  How big was that Stafford goal?  Did he see more focus from his squad?  Was has he liked from the Armia/Copp/Halischuk line?  On the special teams tonight.  Is Armia doing what he needs to do to earn the trust of his coach?  On the play of Nikolaj Ehlers.  On Blake Wheeler’s 400th NHL point and what has changed in his game.