Note:  The Moose closed out the year with a win in front of almost 14,000 fans at the MTS Centre with a solid four goal 2nd period and a 41 save performance by Eric Comrie.  Unfortunately the good feelings didn’t keep going as the parent club Jets dropped a 4-2 decision to the Arizona Coyotes.

Note II:  The Moose and Wild are back at it tonight at the MTS Centre as Manitoba looks to win their first game of 2016.

Winnipeg Free Press:  Jets cap off 2015 with a 4-2 loss to Coyotes.  (Paywall).  Despite all the Jets fans at Gila River Arena

Winnipeg Sun:  Jets fail in sixth try for three-game win streak.  This team just cannot seem to put together a win streak of any significance this season.

Sportsnet:  Coyotes beat Jets behind Doan’s big night.  Somewhat appropriate that he eclipsed the mark previously held by Dale Hawerchuk against a team with the same name (but not the same team) with which Hawerchuk achieved the record.

Arizona Republic:  Doan breaks franchise record in Coyotes’ win over Jets.   Toss in the fact that a player named Domi picked up the primary assist and we are in full bizzaro world.

Illegal Curve:  Coach Maurice post-game scrum.  It was a less than pleased bench boss who spent all his post game scrum talking about penalties. 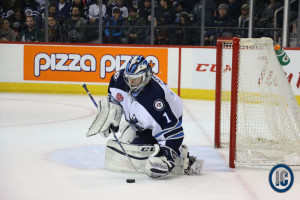