Note:  Final day of 2015 will be a big one as the Moose and Wild play in Winnipeg and the Jets and Coyotes will battle in Glendale.  We will be covering both games and as always stay tuned to illegalcurve.com and our social media including Twitter| Facebook | Instagram for pre and post game news.

ESPN:  Why the Ducks and Jets are the teams most likely to break out.  (Paywall).  It isn’t all bad news in Jetsville and for fans it could make for an interesting 2016.

Winnipeg Free Press:  Hellebuyck is making case for No. 1 role.  (Paywall).  Hard to argue with the play of the rookie who doesn’t act like a rookie.  Coach Maurice used the word ‘consistent’ to describe the young netminder. 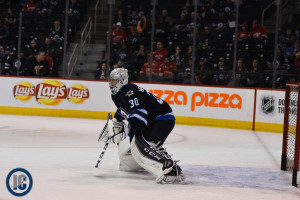 Winnipeg Free Press:  Scheifele ‘feeling better every day’ after concussion.  (Paywall).  Plenty of excitement seeing #55 in the orange non contact jersey but sounds like he still has a number of tests to pass before he will be back in game action.

Winnipeg Sun:  Scheifele’s back — in no-contact jersey.  Does seem likely that he will be back for a game on this road trip but coach Maurice wasn’t prepared to set an exact timeline.

CBC:  Jets heading out to play season-high 5 road games in 8 days.  The Jets face a big test as they head out on the road and try and turn around their road woes.

Illegal Curve:  Jets Practice Report.  A look at the news that came from the skate at the MTS Centre on Wednesday. Also includes audio from Bryan Little, Mark Scheifele and Connor Hellebuyck.

TSN 1290 Winnipeg:  Hustler and Lawless.  Guys discuss the impressive defensive performance of Dustin Byfuglien and Jacob Trouba since being put together earlier this season, and the long-term possibilities of the d-pair.

Illegal Curve:  Coach Maurice scrum.  On the status of Mark Scheifele.  On Pavelec’s status.  On the progression of Connor Hellebuyck since he was first called up.  More on Scheifele’s concussion.  Reversing the road woes.

TSN 1290 Winnipeg:  The Big Show.  J.P. Vigier joined the show to touch on Trouba’s play of late and why Trouba’s move alongside Dustin Byfuglien has worked so well for the Jets.

Hockey’s Futures:  Jets struggling farm still loaded with top-notch prospects.  Plenty to digest on the prospects playing for the Moose.