Note:  The Jets hit the ice for practice today as they get ready to face Central Division rival St. Louis tomorrow night at the MTS Centre.

Note II:  The Moose have the day off following a pair of weekend contests (one win, one shootout loss) against the Admirals.  As always stay tuned for the latest news about the Jets farm club in our Monday Manitoba Moose Report which Peter will be posting later today.

Winnipeg Free Press:  Ladd, Byfuglien, Trouba asking Jets for $152M in contracts.  (Paywall).  That is a fair chunk of change.  Of course just because they’ve asked doesn’t mean they will receive.

Winnipeg Sun:  Thorburn to join Kovalchuk.  He has been a heart and soul type player for this franchise for quite some time.

Winnipeg Free Press:  Jets shuffle deck on blue-line to get more scoring punch.  (Paywall).  Finally deciding that it is time to get Jacob Trouba some more minutes the Jets bench boss is pairing him with Dustin Byfugilien.  You can bet the Jets top four D are going to be logging some big minutes. 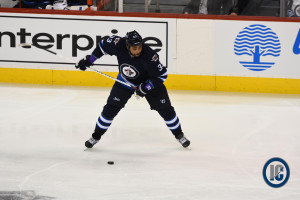 Winnipeg Free Press:  Jets’ gritty division one for the brave.  (Paywall).  Any Toronto Blue Jays fan who watched their team toil away for years in an American League East that saw them get bashed by the Yankees, then the Red Sox, then the Devil Rays knows the pain experienced by Jets fans in a Central Division that features the likes of the Dallas Stars, Chicago Blackhawks, St.Louis Blues and Minnesota Wild.

Winnipeg Sun:  Jets have to start beating Central Division foes right now.  Last season the Jets were able to handle themselves in the deep end of the pool with the rest of the Central but so far this season they are a woeful 3-9 within the always tough division.

Illegal Curve:  Prospect Pulse.  Catching up with the 2015 draft class.

Illegal Curve:  Practice Report.  A look at the lines coach Maurice used in practice at the IcePlex.  Also has audio from Dustin Byfuglien and Andrew Ladd.

Illegal Curve:  Coach Maurice scrum.  Will he give Trouba a shot playing with Byfuglien?  How can these two players compliment each other? Is he getting as much as he wants/needs from the 3rd line?  What is the plan to get Adam Lowry back to where they want him this season?  On the young players and finding their identity.  How much of a concern is it that Byfuglien leads the team in penalty minutes?  Did he send a message to Byfuglien the other night?  What precipitated the change on the back end?  Did he like what he saw?

Illegal Curve:  Moose sunk by Admirals, 4-3 in a shootout.  A look at key plays of game, top 3 players and Coach McCambridge post-game audio.

Globalnews:  Three out of four aint’ bad.  Especially when you consider that this Milwaukee team is one of the top teams in the division.