Note:  The Jets fell to the Hawks last night and the Moose take on the Admirals tonight at the MTS Centre for the Teddy Bear toss game.  Puck drops at 7 pm.

Note II:  Tune into three hours of NHL hockey talk with the Illegal Curve Hockey Show on TSN 1290 Winnipeg starting at 12 noon.  The guys will look at the last couple of Jets games, look ahead to the game against the Blues on Tuesday and take a look around the rest of the NHL.  Guests:  Kelly Chase (Former NHLer) and Arthur Staple (Newsday).

Winnipeg Free Press:  When Jets winger Perreault starts scoring, opponents should be concerned.  (Paywall).  He has been an assist champion this season (19 in 30 games) but he has been shooting more of late including a couple of beauty snipes against Washington and against Columbus. 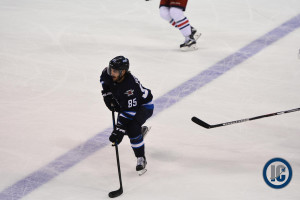 Winnipeg Free Press:  Hellebuyck ends four-game streak as Jets fall 2-0 to Chicago.  (Paywall).  The streak inevitably had to come to an end and it did as a result of the Jets inability to keep the Hawks from scoring during the power play.  Hellebuyck played another strong game between the pipes and had the Jets been able to score he could have easily pulled off his fifth straight win.

Winnipeg Sun:  Hawks bring down Jets.  Ted writes about the Jets continued Central Division nightmare, one that if this team doesn’t wake up soon will find waking them up on the wrong side of bed or in this case the playoff line.

CBC:  30 points in 30 games is not good enough.  Adam breaks down the circumstances for the Jets and they certainly seem rather dire.  He looks at who has been good (short list) in the first 30 games, who hasn’t (longer list), Byfuglien/Ladd, goaltending and who is responsible.

Illegal Curve:  Kyle Connor scores a hat trick for Michigan Wolverines.  Perhaps having been passed over by Team USA recently has given him a burr in his saddle because he had quite the evening in Ann Arbor last night.

Our Windsor:  Brendan Lemieux hat trick leads Windsor Spitfires shut out victory over Sting.  He just got traded but is clearly having a nice impact for his new team.

Illegal Curve:  Coach Maurice post-game.  On the difference in the game.  What did they need to do to offset all the Hawks shot blocks?  On the Hawks fast sticks.  On Hellebuyck’s game tonight.