Note:  The Jets return to the ice following a fun filled evening at the MTS Centre last night where 10,000+ fans watched the 4th Skills Competition.  In case you missed any of it I blogged the entire evening which contains the winners of each event and lots of pictures. 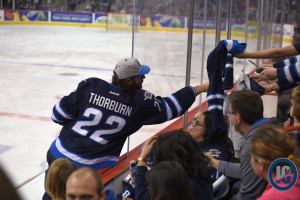 Note II:  Reminder that with a 2 pm start between the Jets and Capitals tomorrow the Illegal Curve Hockey Show brings your three hours of game day coverage on TSN 1290 Winnipeg on Saturday starting at 8 am.

Winnipeg Sun:  Jets need to do the opposite.  Doing the opposite worked for George Costanza! Paul writes about how December is set up for the Jets to find success.

The Hockey News:  Will the Winnipeg Jets have to become sellers this February?  Still plenty of hockey left to play but definitely something to think about.

NHL.com:  Hellebuyck gets a shot.  Article is from a fantasy perspective.

TSN 1290 Winnipeg:  The Big Show.  TSN’s resident scout Craig Button joined the Big Show with a look on the Winnipeg Jets including the pending free agency of Dustin Byfuglien and Andrew Ladd, Connor Hellebuyck’s potential and why Jacob Trouba should not be moved in a potential trade package to get Travis Hamonic from the Islanders.

TSN 1290 Winnipeg:  The Big Show.  After the Jets took down the Maple Leafs in dominating fashion, Paul Edmonds joined The Big Show to discuss the complete effort from the club, the chemistry forming between Nikolaj Ehlers and Alex Burmistrov and the goaltending plan going the rest of the month.

TSN 1290 Winnipeg:  Rona Roundtable.  Head Coach Keith McCambridge talks with Rick Ralph about the 8-2 loss to the Chicago Wolves, the upcoming weekend games vs. Toronto and the play of leading scorer JC Lipon.