Note:  The Jets had Sunday off as they try to get back on track following their three game road trip.  They don’t play until Wednesday night against the Leafs here at the MTS Centre.

Note II:  The Moose are in Wisconsin for a date with the Admirals tomorrow night.  Get ready for another Monday Manitoba Moose Report this afternoon at 1 pm which will bring you up to speed with the latest news about the Jets farm club.

Note III:  Today is the final day of #Movember and our boy Ezra Ginsburg has donated his face to raise funds and awareness.  In terms of raising funds he could always use a boost and if you are so inclined you can donate to his Movember cause here.

Sportsnet: Trouba key to possible Islanders-Jets Hamonic trade.  Not sure many Jets fans want to see the young defenceman, who many still see as a long term piece for this team’s success, as a asset they would want to see dealt.

Winnipeg Sun:  Jets need to decide soon on Ladd, Byfuglien.  Jets fans likely believe that word “soon” should have been this past summer.  But no point in lamenting what could have been.  Have to get something done for the long term stability of the franchise. 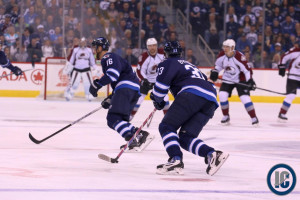 CBC:  It’s time to do something with Ladd and Byfuglien.  Both players aren’t going to be discussing with the media their thoughts vis a vis their contract situations during the season although that hasn’t stopped their agents from continuing discussions with the team.