Note:  The Jets finally ended their road winless streak at six games with a big win in St. Paul yesterday afternoon. But no rest for these Jets as they will take on the Colorado Avalanche tonight in Denver.  We will be covering the game and as always stay tuned to illegalcurve.com and on social media including Twitter| Facebook | Instagram for pre and post game news.

Note II:  Kick off Jets game day coverage with three hours of NHL hockey talk as the Illegal Curve Hockey Show hits the TSN 1290 Winnipeg airwaves at 3 pm.  The guys will break down the Jets/Wild game and preview tonight’s Jets/Avalanche game.  In addition they are going to be going player by player evaluating your Winnipeg Jets at the 1/4 point in the season.  Guests:  Drew Spevak (ESPN Denver) and Marty Biron (TSN-RDS-NHL Network)

Note III:  We have less than a week left of #Movember and our boy Ezra Ginsburg has donated his face to raise funds and awareness.  In terms of raising funds he could always use a boost and if you are so inclined you can donate to his Movember cause here.

Winnipeg Sun:  Scheifele, Oates to make sweet music?  Considering the skill set that Oates possessed during his playing days any techniques he can pass along to the young Jets centre would be worthwhile.

Winnipeg Free Press:  Hellebuyck not pressed in debut.  (Paywall).  While it was nice to win his NHL debut it wasn’t too difficult a game for the rookie. 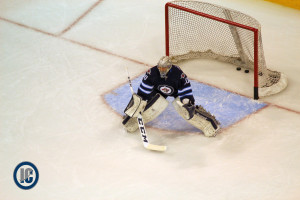 Winnipeg Free Press:  Jets finally put it all together.  (Paywall).  It was the most complete game that Winnipeg has played in some time.  They were able to keep Minnesota relatively contained for most of the 60 minutes.

Winnipeg Sun:  Ehlers snaps lengthy goal drought with insurance marker.  Not only did he break the goalless streak but he did so in pretty spectacular fashion.

CBC:  New goaltender, new defensive focus for the Jets.  Another breakdown of the Jets win over the Wild.

Sportsnet:  Trouba goes up high on hit on Granlund.  (Video).   He kept his arm in but did make contact with Granlund’s head.  Was it high or was Granlund too low?

Sportsnet:  Why Nikolaj Ehlers is a star in the making!  After last night’s goal fans are hoping his goalless streak will become a thing of the past.

Illegal Curve:  Coach Maurice post-game.  Thoughts on the performance of Hellebuyck.  What did the team do well in the 1st period?  Was that just another game for Hellenbuyck?  How much does the element of a fresh goalie impact the rest of the team?  When did he let Hellebuyck know he was in net?  On the need for Perreault to shoot more.  What did it mean for Ehlers to get that goal?  Was this game any more important than any other?  Tempted to go back to back with Hellebuyck?

The Plain Dealer: Lake Erie Monsters roll past Manitoba Moose, 4-1.  Read about the game from a Cleveland beat writer’s perspective.