Note:  Jets are looking to turn around their recent travel woes and pull off a big (and increasingly rare) Central Division road victory.  With it being a holiday down south the Jets and Wild kick off festivities at 3 pm.  We will be covering the game and as always stay tuned to illegalcurve.com and on social media including Twitter| Facebook | Instagram for pre and post game news.

Note II:  We have less than a week left of #Movember and our boy Ezra Ginsburg has donated his face to raise funds and awareness.  In terms of raising funds he could always use a boost and if you are so inclined you can donate to his Movember cause here.

Winnipeg Free Press:  Are unresolved player contracts and swirling trade rumours hurting the Jets? (Paywall).  Have to think it would have the opposite effect as players like Ladd and Byfuglien are essentially playing this season to earn their next and likely last significant contracts. 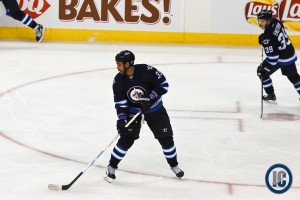 Winnipeg Free Press:  Maurice reflects on getting Jets out of November slide.  (Paywall).  You have to think (although we have thought that before) that the bench boss has hit his limit with the undisciplined play and is reigning in the team as they try to get the season back on track.

Winnipeg Sun:  For Jets, it’s a defensive downer.  It really is difficult to think that this team is largely the same group that made up last year’s squad but yet the results have not looked like anything anyone would have anticipated following the success from 2014-15.

Minneapolis Star Tribune:  Parise’s return gets a little closer for Wild.  Gets some insight into the Jets opponent.

Illegal Curve:  Coach Maurice scrum.  Can he share his goalie plans for next couple of games?  Can he take anything away from the game they played despite the loss against Washington?  How do they get back to being a better defensive team? Is he surprised at the regression of the team? How big an element is the risk/reward aspect of how this team plays?  Is he getting feedback from the players that they aren’t comfortable with the way the team is playing?  Temptation to give Armia a look with the need for secondary scoring.

TSN 1290 Winnipeg:  The Big Show.  Dennis Beyak joined the show to break down the defeat and hinted at potential changes to the Jets lineup when they take on the Wild tonight.

Winnipeg Sun:  Moose get boost from Harrison.  He is that veteran presence that young teams can often gain quite a benefit from and Manitoba coach Keith McCambridge has to be very pleased to have #20 back in the lineup.