Note:  The Jets ended their losing streak on Wednesday with a big win over the Canucks.  Tonight they look to make it two in a row at the MTS Centre as they face off against the Arizona Coyotes with puck drop at 6:00 pm. We will be covering the game and as always stay tuned to illegalcurve.com and on social media including Twitter | Facebook | Instagram for pre and post game news.

Winnipeg Free Press:  Stafford back on the attack. (Paywall).  Coach Maurice talked about the importance of secondary scoring and getting some production from #12 is very important for this team. 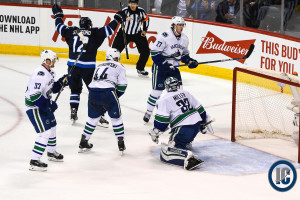 Winnipeg Free Press:  Tips and tales from an eight-night, four-game getaway with the Jets. (Paywall).  Ever want to go on the road with a team beat writer?  Paul takes you on this journey through the central.

Winnipeg Free Press:  Wheeler questionable after Buff slapper to head. (Paywall).  It was an ugly shot (which you can see below).  Jeff also covers the NHL bye week, Luca Sbisa apology to Ehlers for hit and Trouble with Trouba.

Winnipeg Free Press:  Jets players score style points for their fashion sense. (Paywall).  Never thought I’d be reading a Fashion Police article about an NHL team in Winnipeg but there you go.

Winnipeg Sun:  Jets say ‘in-your-face’ approach the way to go.  A return to being the Portage Avenue Pummelers may be that sense of pugilism that has been missing from this squad.

Sportsnet:  Wheeler takes Byfuglien shot in the face.  (Video).  Thankfully for Wheeler it wasn’t a Byfuglien slap shot but I’m sure that comes as small solace when he took that shot to the face.  Luckily for Jets fans he was able to skate off on his own.

Today’s Slapshot:  Coyotes GM Maloney Says Losing Blake Wheeler ‘Is Still a Sore Spot’.  Not surprising given what #26 has become for the Jets.

Fox Sports: Hamonic is an ideal fit for three teams, but it leaves the Islanders in a sticky situation.  Will be interesting to see how quickly this trade happens.

TSN 1290 Winnipeg:  Hustler and Lawless.  Jets forward Drew Stafford joined the guys and spoke about how the team benefited from changes in lines after the road trip, and discusses how the team can build momentum at home.

TSN 1290 Winnipeg:  Hustler and Lawless.  Paul Edmonds discussed a prospective trade for Travis Hamonic to Winnipeg. Edmonds says the Jets should, and probably will, make the trade only if it makes sense for the on-ice product.

Globalnews:  Moose suffer hard fought loss to Condors.  It looked like we might see some extra time last night but the Condors scored late in 3rd to break the 1-1 tie and then an inopportune penalty by Scott Kosmachuk with 2:40 left in the 3rd all but sealed the Manitoba chance at a comeback.

TSN 1290 Winnipeg:  Hustler and Lawless.  The voice of the Manitoba Moose, Mitch Peacock chats about the first thirteen games of the AHL season. Peacock says players like Josh Morrissey and Joel Armia have been improving as the team improves, and provides an update on Thomas Raffl.

TSN 1290 Winnipeg:  Rona Roundtable.  Patrick Williams of NHL.com talks with Rick Ralph about the Manitoba Moose, what Nic Petan can bring to the team and who the next call up might be.