Note:  The Manitoba Moose welcome the Bakersfield Condors to the MTS Centre tonight as we kick off three games (Moose tonight, Jets vs. Coyotes on Saturday and Moose on Sunday) in three days.  We will be covering all the games and as always stay tuned to illegalcurve.com and on social media including Twitter | Facebook | Instagram for pre and post game news.

Note II:  The Jets hit the ice at 11 am today following Wednesday’s 4-1 win over the Canucks.  The Jets Practice Report will give you the latest news from the MTS Centre.

Winnipeg Free Press:  The Jets are still most short-handed team, and the numbers are getting worse.  (Paywall).  You simply cannot spend all that time in the penalty box.  The word discipline seems to be out of the Jets lexicon but it is high time to add it back. 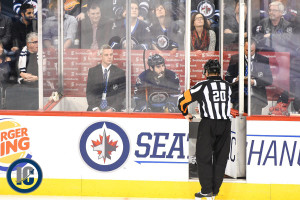 Winnipeg Sun:  Who are the real Jets? Last year’s gritty team, or this year’s team that is struggling to find identity.  Paul tries to figure out exactly who this team is.

Sportsnet:  Jets goalie numbers in decline.  Not really an article.  Simply a picture with the numbers for the goalies this season.

Illegal Curve:  Travis Hamonic requests trade; Winnipeg listed as potential destination.  He has folks from Manitoba to British Columbia salivating at the thought of getting a top four defenceman into their team’s lineup.  Post contains quotes from Hamonic in his first interview since this news went public.

TSN 1290 Winnipeg:  Hustler and Lawless.  New York Islanders color analyst Butch Goring joins Hustler & Lawless to discuss how the trade of Travis Hamonic would affect the Isles. Goring discusses the play and contract of Hamonic, and who from the Winnipeg Jets could be traded for Hamonic.

TSN 1290 Winnipeg:  Hustler and Lawless.  TSN hockey analyst Dave Poulin joins Hustler & Lawless to discuss Travis Hamonic as a player, and what the Winnipeg Jets have in their roster to possibly trade for Hamonic.

TSN 1290 Winnipeg:  Rona Roundtable.  Arthur Staple of Newsday discusses Travis Hamonic’s request to be traded to be closer to his family and what Islanders GM Garth Snow would require in a trade.

TSN 1290 Winnipeg:  The Big Show.  Sean McIndoe joined the Big Show for some puck talk including Travis Hamonic’s trade request, the new NHL All-Star format and why a 9-9-2 start for the Winnipeg Jets may already have them in danger of missing the post-season.

TSN 1290 Winnipeg:  The Big Show.  Paul Edmonds joined the show to touch on the potential impact Hamonic could have on the Jets’ blueline and breaks down Winnipeg’s victory over the Canucks.

Globalnews:  Nic Petan staying positive after re-assignment to Manitoba Moose.  I really think in the end this is going to be best for him in the long term.

Illegal Curve:  Did Nic Petan miss an opportunity with the Manitoba Moose.  Peter wrote this last week but it is worth reading again in light of yesterday’s move to send the 2nd round pick to the AHL for some more seasoning.