Note:  The Jets try to recycle the memory of that last road trip and having not won a game since beating Toronto back on November 4th.  Tonight they are back within the friendly confines of the MTS Centre taking on the Vancouver Canucks with puck drop at 6:30 pm. We will be covering the game and as always stay tuned to illegalcurve.com and on social media including Twitter | Facebook | Instagram for pre and post game news.

Winnipeg Free Press:  Early deficits continue to plague Jets.  (Paywall).  You’d think consistently getting behind the 8 ball would be a concern but it doesn’t appear to be the case.

Winnipeg Sun:  It’s not Nic’s time yet…Jets should send Petan to Moose for playing time.  This is a similar sentiment shared by our Moose reporter Peter Siamandas who wrote as much last week.  Ken also believes that time spent in the AHL will serve the Jets forward well.  What do you think? 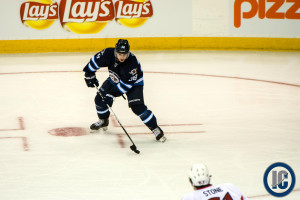 CBC:  5 things to watch as Jets try to stop tailspin against the Canucks.  Including 1) November woes 2) Ehlers and Scheifele 3) Sedin twins 4) Goalie battle and 5) Penalty trouble.

ESPN:  Shaky goalies, tough division among the problems as Jets seek answers.  Pierre LeBrun, Scott Burnside and a number of other hockey analysts voice their thoughts on the current state of the franchise.

Sports Illustrated:  Mysterious decline in Jacob Trouba’s game at heart of Jets’ skid.  Looking at some of the factors in the decline this season of the Jets prized d-man.

The Hockey News:  Pavelec, Hutchinson need to step up for Jets to challenge in Central.  A lot of that seems to be attributed to the play of the defence which has been anything but stellar this season.  But as the Jets bench boss has said the entire team needs to play better than they have if they actually want a repeat of last season`s whiteout.

Sportsnet:  Ben Chiarot & Adam Lowry.  (video).  Both young players participate in a know your city trivia.  As an aside where does Ben Chiarot spend his time if he has never seen a 7-11 in Winnipeg?