Note:  The Jets attempt to salvage some dignity and points with the final game on this four game road trip.  Of course it won’t get any easier as they take on the St. Louis Blues at the Scottrade Center at 7 pm. We will be covering the game and as always stay tuned to illegalcurve.com and on social media including Twitter | Facebook | Instagram for pre and post game news.

Winnipeg Free Press:  Nashville debacle a new low for Jets. (Paywall).  Prior to the start of the game the goal light at the Nashville end wasn’t working and the commentators wondered if that was an ominous sign.  Well it was for Winnipeg but we do know that the light certainly worked on the Jets end of the ice.

Winnipeg Free Press: Maurice bumps Perreault to top line. (Paywall)  After what we’ve seen the last three games from the Jets it isn’t a surprise that coach Maurice is ready to disrupt the natural order of things. 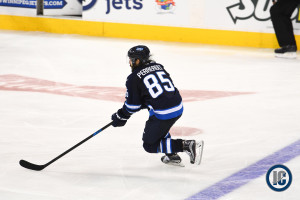 Winnipeg Sun:  Jets down in the dumps.  It really is going to be interesting to see how this team reacts tonight to a game that some are referencing as ‘must win’.  Of course the game against Dallas was so referenced as was Saturday’s contest against Nashville.

St. Louis Post Dispatch:  Blues ready for break from division play.  I believe that sentiment would be echoed by the Jets as well.  Read about the Jets opponent from a St. Louis perspective.

Illegal Curve:  Jets Practice Report.  The line blender was out again yesterday but there is no indication what coach Maurice may do with his forward lines and D pairs.  Post also has audio from Tyler Myers and Adam Pardy following the skate in St. Louis.

Illegal Curve:  Coach Maurice scrum Thoughts on Adam Pardy  How does he get the team to end the trip on a winning note.  Does the Blues style better suit the Jets?  Is the forecheck becoming more important in getting back to their game?  Mistakes with their sticks.  On breaking up the top lines (potentially) is that an attempt to get more balanced scoring?  Has the road caught up to them?  What does he want to see from Perreault on top line?