Note:  The Jets have dropped the first two of four in this all important central division road trip.  They will try to get things back on track with a date in Nashville, Tennessee as they face off against the Predators in a 6:00 pm contest at Bridgestone Arena.  We will be covering the game and as always stay tuned to illegalcurve.com and on social media including Twitter | Facebook | Instagram for pre and post game news.

Winnipeg Free Press:  How Jets respond to slump key to fate.  (Paywall).  As Blake Wheeler says it is important that the team sticks together and gets themselves out of this slump.

Winnipeg Free Press:  Jets hope to sing a winning tune in Nashville.  (Paywall).  Will the line blending continue or has the coach finally settled on the lines he plans on using?  We will know more after the skate today.

Winnipeg Sun:  Jets need to pick up urgency in midst of slump.  While there is still plenty of season to go it is always best to nip this sort of streak in the bud before it becomes too big a trend to reverse.

Sportsnet:  Should the Winnipeg Jets re-sign Dustin Byfuglien?  It is a question that fans have been asking (and answering) for the entire summer.  Anytime you find yourself grappling with the above question helps to pair it with Richard’s analysis of what a contract for big #33 might look like.  For that analysis click here.

Illegal Curve:  Jets Practice Report.  Some notes from the Jets skate yesterday as well as some audio with Mathieu Perreault and Bryan Little.

Illegal Curve:  Coach Maurice scrum.  What does he want to see tomorrow night against Nashville? Finding balance between urgency and sticking with structure. Changing the pairings mid game. Did he like what he saw from the 3rd line? Assessing the Predators. Anything he can say about the special team? Any indication as to who the goalie might be tomorrow?

TSN 1290 Winnipeg:  The Big Show.  Colour analyst Shane Hnidy breaks down the loss including how the team can correct their defensive collapses which have seen Winnipeg fall to 27th in the NHL in goals allowed.

Winnipeg Free Press:  Moose leave Wolves howling in OT.  Manitoba fought back against one of the top AHL squads last night in front of a sold out MTS Centre.  Plenty of young fans got to enjoy the action. 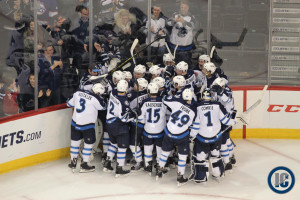 Winnipeg Sun:  Moose tame Wolves.  It was clear that the entire team was happy to finally get their first home win last night.