Note:  The Jets face off against the Stars in a 7:30 pm contest at American Airlines Center in Dallas, Texas.  We will be covering the game and as always stay tuned to illegalcurve.com and on social media including Twitter | Facebook | Instagram for pre and post game news.

Sportsnet:  30 Thoughts.  15 (Jets being in on Condon) and 17 (Byfuglien appreciative for Jets support).

Winnipeg Free Press:  Jets coach faults the ‘D’ for recent slump.  (Paywall).  When coach Maurice turned a shade of purple I didn’t think was possible on the bench in the 2nd period of the game against the Wild on Tuesday, it was pretty clear that you could expect some changes.

Winnipeg Sun:  Cooled Jets get practice in pace.  The Jets bench boss seemed pleased the way his troops responded in practice yesterday and it will be interesting to see how that transitions to tonight’s game against Dallas.

Dallas Morning News:  Stars need to take advantage of power plays against division opponent.  Appears the Jets reputation for taking penalties is preceding them into the Lone Star state.

Illegal Curve:  Jets Practice Report.  A look at the lines (including the mixed bottom six) as well as the new defensive pairs.  The post also had audio from Ben Chiarot, Drew Stafford and Adam Lowry.

Metro News:  Jets cannot afford to cool during crucial stretch of season.  The central is such a tough neighborhood that a losing streak of any significant amount can put you quite behind the 8 ball.

Hockey’s Futures:  Jets have high-end prospects at every position.  Nice little review of the prospects within the system.

The Hockey News:  Meet Nikolaj Ehlers, the fastest hockey player on Earth.  Missed this article on the rookie that has been turning heads for Jets fans all season long. 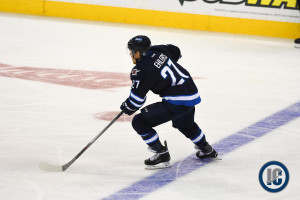 Illegal Curve:  Coach Maurice scrum.  Wheeler status after leaving practice early.  How was this day in flushing yesterday’s game?  Quickness/Pace.  Was the game lost in six or seven minutes?  What does he need to see from Ben Chiarot?  Shuffling bottom six.  Needing to get back on secondary scoring.  What has he seen from Dallas this season?  On increasing the pace defensively.  Will he share his goalie?

Globalnews:  Moose pause practice to remember fallen soldiers.  Good for the coach and also for the players who realized the significance of the sacrifice.