Note:  Another day, another hockey game as the Jets play their first Central Division opponent today.  It will be an afternoon game with puck drop at 2 pm at the MTS Centre.  We will be covering the game and as always stay tuned to illegalcurve.com and on social media including Twitter | Facebook | Instagram for pre and post game news.

Winnipeg Free Press:  Aggressive attack name of the game in today’s NHL. (Paywall).  Coach Maurice had some interesting comments when asked about this innovation.

Winnipeg Free Press:  Good teams seem drawn by central location. (Paywall).  There is no question where the toughest neighborhood in the NHL is once again this season.

Winnipeg Free Press:  Ehlers has hockey in his blood, as a chat with his father reveals.  (Paywall).  Easy to see where the prospect gets his compete from.

Winnipeg Sun:  Wheeler flying out of the gate.  After a two goal and one assist night to kick off the 2014/15 season against Arizona the big winger went without a point in six of the next eight games.  In his first five games this season he has found the scoresheet in every game and has been an impact player in each game. 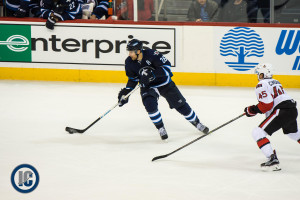 Global news:  Jets off to hot start, look to extend success against St. Louis Blues.  Both teams enter the game with identical 4 win and 1 loss records in the Central.  Blues are always a tough match up for the Jets and it will be interesting to see how both teams play in the afternoon contest.

Sportsnet:  Coach’s Corner. (Video).  Ron and Don with their always entertaining segment chat about the Jets and specifically their penalty killing from 1:23 until 2:01.

Illegal Curve:  Jets Report.  News about the Jets practice at the MTS Centre yesterday as well as audio from Mark Scheifele.

Illegal Curve:  Coach Maurice scrum.  Has he decided on his goalie for tomorrow?  Status of Ben Chiarot.  How much more pressure there is in the game.  Does he have to follow that game plan?  What is the key to the evolution of a power forward (Wheeler).  Having the team scoring more goals.  What are the chances we see Peluso make his debut tomorrow? On the depth of the Central.  What did they do defensively to limit Calgary and how does he bring that to the game against St. Louis.

Global news:  Moose react to overtime loss against Ontario Reign.  The team is still without a victory but it sounds like Connor Hellebuyck put on quite the display in the loss.

Part 1:  Jets talk including a recap of last night’s game, preview of tomorrow’s game against the Blues, Jets penalties, a look at how the Jets defence ranks in NHL.  To listen click here.