Note:  Fans left last night’s Jets home opener happy as the home side beat the visiting Calgary Flames 3-1 in front of a capacity crowd.  Be sure to check out our illegalcurve instagram account with plenty of pictures and videos from last night. Winnipeg hits the ice today at the MTS Centre for a skate at noon and we will have audio following the practice.

Note II:  The Moose play their second home game tonight as they still look for their first win as the re-born Manitoba franchise.  Puck drops at MTS Centre at 7 pm.

Winnipeg Free Press:  The Winnipeg Jets came home, and put out some Flames.  (Paywall).  It was a bit of a listless game to start but eventually the Jets began to assert themselves during periods 2 and 3.

Winnipeg Free Press:  Amazing Buff brings win.  (Paywall).  That was a goal (which turned out to be the game winner) that we will be talking about for quite some time.  It took some serious talent to put himself into position to get that chance. 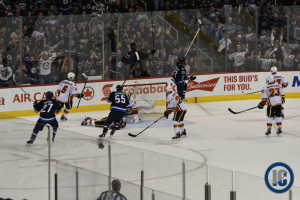 Winnipeg Free Press:  Pavelec thwarting opening onslaughts.  (Paywall).  While many fans continue to have doubts with the Jets goaltending, as they expect the bubble to burst, it just seems like the goalies have finally found a structure they are comfortable playing within.

Winnipeg Sun:  Byfuglien wins it for Jets.  It was simply one of those goals that we had to look up at the TVs just to catch the replay to ensure that we had seen it properly.  Ken breaks down the game.

Winnipeg Sun:  Byfuglien trying to keep up with young guns.  It is going to be extremely tough for Jets management as the year progresses and they are forced to make a decision with respect to big #33.

Winnipeg Sun:  Adam Pardy has learned to stay positive and ready to play.  Coach Maurice sings his praises each and every time he receives a query about the East Coast defenceman as he continues to try and maintain his position within the framework of this deep defence.

CBC:  Vets show the way.  Recapping the game including 1) Go to the net and 2) Leave it to the Vets.

CTV News:  Jets fans take in unique screening of home opener.  While the temps are still “balmy” it is probably a fun way to take in a hockey game if you don’t have tickets to be inside.

Calgary Herald:  Ramo owns up to late mistake as Flames get Buffed in Winnipeg.  It is one that the Calgary goalie would like to have back, especially as it came so late in the 3rd period. 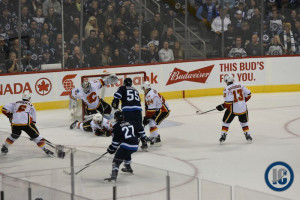 Illegal Curve:  Jets set to raise the seats 2.5 inches.  Hundreds of fans complained to the Jets and the organization heard those complaints and have plans to make changes to remove the obstructions.

Pressbox Podcast:  Host and analyst Richard Pollock breaks down the Jets play against the Flames this evening. To listen click here.

Winnipeg Free Press:  Learn from the best.  (Paywall).  The Ontario Reign are the standard (well at least they were last season when they were the Manchester Monarchs) that many teams are trying to emulate.

Illegal Curve:  Brendan Lemieux suspended indefinitely for head check.  If you missed this last night the Jets prospect received an indefinite suspension.  You can watch the video in this post.