Note:  The Jets are in Brooklyn for the first time to take on the Islanders in Game 3 of the 2015-16 season with puck drop at 12 pm.  Be sure to keep it locked to illegalcurve.com and on social media including Twitter | Facebook | Instagram for all the pre and post game news.

Winnipeg Free Press:  Jets eager to test themselves against tougher opponents.  (Paywall).  The Islanders are still looking for their first win this season.  But they will give the Jets a tough test this afternoon.

Winnipeg Free Press:  Stats just one indication of Scheifele’s maturity.  (Paywall).  He continues to grow his game year after year and it looks like he has taken it to the next level for this season. 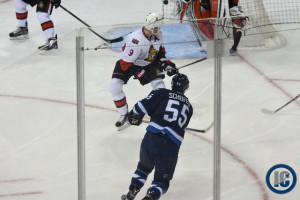 Winnipeg Sun:  Lowry ready to take next step.  It is pretty clear that coach Maurice has a defined role for the big centre and likes having

Winnipeg Sun:  Scheifele growing into expanded role.  Two goals in his first two games has fans around these parts buzzing about the first ever pick by the Jets.

Illegal Curve:  Coach Maurice scrum.  Status of Myers.  What will it be like going to Brooklyn for first time?  Anything in particular jump out at him from the two wins upon further reflection?  Giving Adam Lowry more time and responsibility.  On the growth of Mark Scheifele.  Having “shark” in a young player’s game.  Goalie talk.  Does the day game help with the back to back the next night?