Note:  The Jets have until today at 5 pm ET to get their roster down to 23 (currently at 24).  Be sure to keep it locked to illegalcurve.com and on social media including Twitter | Facebook | Instagram for any roster moves as well as the latest Jets news from training camp.

ESPN:  Ranking all 30 teams by defence.  (Paywall).  Jets D are also ranked 14th (see below for forwards) on this list.  Talks about Byfuglien and whether he would still be with team at deadline.

Winnipeg Free Press: Don’t paint young Jets out of playoff picture.  (Paywall).  Last season it was easy to select the Jets as a team that wouldn’t be able to handle the rigors of a tough Central Division and one that would fail to make the playoffs.  Gary counsels against picking against the Jets.

Toronto Sun:  Looking for an encore.  After finally getting a taste of the post season last year Ken writes about the Jets desire to return once again to that promised land.

Winnipeg Sun:  Rookies earned it.  Nothing was handed to these rookies as they were forced to compete with veterans for a role with the Jets. 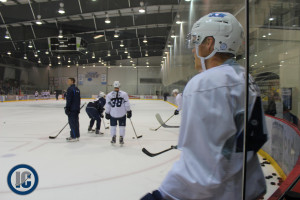 Winnipeg Sun:  Cut-down day tough on Winnipeg Jets coach Paul Maurice.  When you have to send down a veteran it isn’t easy.  When you have a pre existing relationship like coach Maurice does with Jay Harrison it makes it even tougher.

TSN:  Young Jets ready to produce for Maurice.  Dennis sets you up with this article as we get ready for training camp to end and the regular season to start.

TSN:  30 bold team predictions.  They go in alphabetical order so you can skip to #30 if you just want to read about the Jets.  It has to do with Dustin Byfuglien being traded.

Global News:  Jets fans trying to get ‘Dancing Gabe’ on national stage.  He is as much a staple of our community as anything or anyone else tied to sports in Manitoba. When I first added our voice (via twitter) it was at 1058 more signatures required and now that number is down to 377 (as of 7 am).  You can join the petition by clicking here. 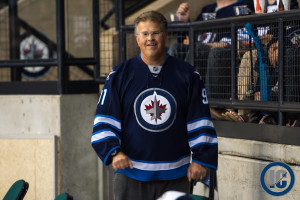 Metro News:  New book a lesson in all things Winnipeg Jets.  Jon is a solid author so I’m sure the book will be a good read.

ESPN:  Ranking all 30 teams by  forwards (Paywall).  Jets ranked 14th in this article.

Illegal Curve:  A look at the Jets lines and D pairings.  After the moves made earlier in the morning the Jets had 24 players on the ice for the skate at the MTS Centre yesterday.

Illegal Curve:  JC Lipon re-assigned to Moose.  He had a good camp but was seen as the likely player heading back to the Moose prior to getting the roster down to 23.

Illegal Curve:  Coach Maurice scrum.  How tough was it to have that conversation with Jay Harrison?  What separated him from the other two defencemen?  What was the biggest thing JC Lipon showed during training camp?  On telling young prospects they’ve made the team.  On having four guys who didn’t play in NHL on the roster.  Update on status of Thomas Raffl.  Has he set his D pairings?  His excitement level of having the projected lines (as they were today) to start regular season?  How does he feel the team is most different from last season?  Why Wheeler with Little/Ladd and Scheifele with Perreault/Ehlers.