Winnipeg Sun:  Jets ready to roll in Young Stars opener vs. Flames.  Ken is down in B.C. and sets you up for tonight’s first prospect game.  Includes forward lines and defence pairings.

Winnipeg Free Press:  Jets young stars improved but still have plenty to prove.  Ed points out that it may be a tad premature to be handing any of these young guns an NHL roster spot.

Winnipeg Free Press:  Jets announce broadcast schedule for the winter.  If you won’t find yourself inside the MTS Centre as often as you’d like this season, fear not as you will have plenty of coverage.

Winnipeg Sun:  Prospects hoping to impress at tourney.  Some of the prospects will be hoping to use this tournament to leap frog into Jets training camp.  Included in Ken’s article is setting the tone, the wild card and the men behind the mask. 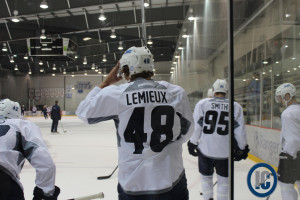 Winnipeg Sun:  Prospect Josh Morrissey says fitness and nutrition regime highly successful.  All eyes will be on Josh Morrissey this season as fans wait to see what impact his new shift in training has this season.

TSN 1290 Winnipeg:  Hustler and Lawless.  Paul Edmonds ahead of the Young Stars tournament discusses the major storylines he will be looking for from the Winnipeg Jets in Penticton, BC, including from players like Andrew Copp and Nikolaj Ehlers.

TSN 1290 Winnipeg:  Rona Roundtable.  Craig Button discusses the Winnipeg Jets roster and the rest of the YoungStars Tournament in Penticton, BC.