Note:  Be sure to stick with Illegal Curve Hockey on the website, twitter and instagram as we bring you right into the BB&T Center for Day 2 of the NHL Entry Draft.  Ezra and I will also be broadcasting with Gary Lawless and Andrew ‘Hustler’ Patterson on TSN 1290 from 10 am est until 3 pm est.

Winnipeg Free Press:  Connor a coup at No. 17.  After the Jets made the selection many pundits were already lauding Winnipeg for making another great addition to their stable of prospects. 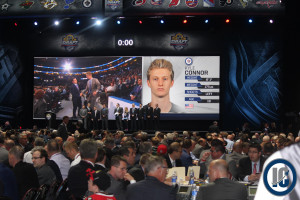 Winnipeg Free Press:  Best deal often the one that’s not made.  Sure sounded like he was in the mix for a move but said sometimes it is the deals that don’t get done that work out best for the team.  Gary also talks about getting a deal done with Ladd, saying farewell to Frolik and talking term with Byfuglien.

Winnipeg Free Press:  First-round pick Roslovic has links to former Jet Tkachuk. He will sure get plenty of info from the former Jets 1.0 on all things Winnipeg.  He seemed quite happy to be a “trailblazer” for kids in the Columbus area as he became the first ever selected in the 1st round.

Winnipeg Sun:  Cheveldayoff took best shot at moving up in NHL Draft but couldn’t find fit.  While many fans would have liked to see the Jets in the top 10 they were unable to get it done.

USA Today:  The winners, losers and strange moments from Day 1 of the NHL draft.  Kevin Allen has the Jets with the best value pick of day 1.

Columbus Dispatch:  Jets make Jack Roslovic first Columbus-born first-rounder.  In addition to the usual contingent of Winnipeg media there were a number of Ohio writers in attendance to chat with him.

Detroit Free Press:  Expectations high for U-M recruit Connor in NHL.  This article on Kyle Connor came out just before draft began but gives you some insight into the player the Jets drafted and why he may have been quite a steal at 17.

Illegal Curve:  Looking back at the Winnipeg Jets draft Day 1.