Note:  I will be down at the MTS Centre this morning (keep it locked to @illegalcurve for all updates) as the Jets players, coach Paul Maurice and GM Kevin Cheveldayoff conduct their exit interviews.

Winnipeg Free Press:  What’s next in Jetsville?  Ed begins the off season with these five questions/issues including: 1) Can they stick together as a team? 2) Prime time players or more seasoning required? 3) Has the goaltending question been answered? 4) The captain and the big man. and 5) A new name under the microscope.  As an added bonus Ed gives you six promising numbers and three ugly numbers.

Winnipeg Sun:  What went wrong?  Paul looks back at the sweep as he tries to ascertain what went wrong for a team that showed so much promise.  He looks at 1) The experience factor. 2) Star power. 3) Between the pipes. 4) The young pivots. 5) Overachievers. 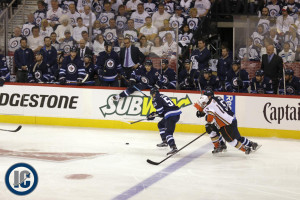 Winnipeg Sun:  Future still looks bright for Jets.  Crazy to start talking training camp with the season just ending but Ken brings to our attention several subjects which require attention including: 1) How can the Jets get better? 2) What are the signing priorities? 3) Which rookies will make an impact?

CBC:  Winnipeg Whiteout ‘doesn’t make sense anymore’.  Personally I like the uniformity of the whiteout.  If you want to turn it into an all blue crowd to match the jerseys the Jets wear on the ice, I would be fine with that as well but I think it would be a mistake to pass on the tradition.

National Post:  Jets have a bright future ahead of them: Five reasons for optimism in wake of playoff exit.  Traikos gives you five reasons to head into the off season with some positive thinking including: 1) Prospects 2) Defence 3) Scheifele 4) Goaltending and 5) Paul Maurice.

Globe and Mail:  Three key questions the Jets face this off season.  As the autopsies begin the three topics in this article are: 1) What to do in goal? 2) Who stays and who goes on the blueline? and 3) How ready are the kids to contribute?