Note:  The majesty of the return of the whiteout was offset by the crushing OT defeat that sent the 15,000+ Jets faithful home and left their team one loss away from a sweep.

Note II:  The team won’t be conducting an on ice practice but will be chatting with the media so keep it locked to illegalcurve.com for the latest Jets news.

Winnipeg Free Press:  Jets looking for answers to third-period problems.  Three games in a row where they had a 3rd period lead and were unable to close it out.  While the players seem unable to conclude why this is happening they aren’t throwing in the towel just yet.

Winnipeg Free Press:  Fans impress with Jets fever.  Despite the loss the Jets players were suitable impressed by the display put on by their fans last night.  It was easily the most impressive showing we have seen since the return of the Jets.

Winnipeg Free Press:  Jets still just little ducklings.   While the Jets became media darlings to knock off these Ducks it does bear noting that this Anaheim team was the first place team in the West and that didn’t exactly happen accidentally.  Gary writes how the Jets still have some growing to do.

Winnipeg Free Press:  Fans fully embrace whiteout tradition at MTS Centre.  I was suitably impressed during the game whenever I would look into the crowd.  Each time I would pick out a fan wearing something entertaining as it seemed like all 15,000+ fans put effort into the costumes they wore to the MTS Centre last night. 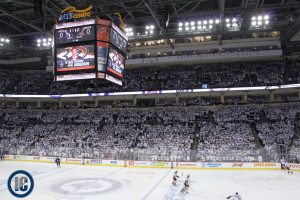 Winnipeg Sun:  Heartbreak for Jets in 5-4 OT loss.  It was the kind of game where you paid for the entire seat but you only used the edge.  Despite the 7th man energy from the crowd the Jets couldn’t hold off a very good Ducks team.

Winnipeg Sun:  Jets impressed by MTS Centre whiteout.  For the first NHL playoff hockey game in this town since 1996 the fans in Winnipeg certainly put on a terrific show with all the eyes from across the league on the MTS Centre last night.

Globe and Mail:  Jets let down by Byfuglien, depth players.  Mirtle writes that the Jets not getting sufficient contributions from #33 as well as their depth to get it done.

Globe and Mail:  Jets blow another third-period lead; on the brink of elimination.  Hard to believe that a team many were picking to eliminate the Ducks and contend for the Cup is on the verge of being swept out of the playoffs.  But that is why the game is played on the ice and not decided by the pundits.

NHL.com:  Jets lose, Winnipeg wins.   While the team lost the game they certainly haven’t lost the faith of the legions of fans they command in this city.  And both did Winnipeg put on a good show last night.

NHL.com:  Commissioner Bettman thrilled for Jets, Winnipeg.  He spoke rather glowingly about the city and this ownership group during the presser.

CBC:  Jets fans heartbroken but still optimistic after Game 3 loss.  Give the MTS Centre faithful credit for sending their team off the ice with a “Go Jets Go” chant right after the OT goal was scored against Winnipeg. 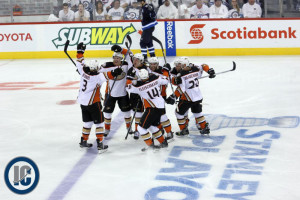 CBC:  Winnipeg’s mayor says don’t count the Jets out yet.   Not sure why this should reassure fans but ok.

Sportsnet:  Jets and Ducks deliver instant classic.  It was one of those games that instantly became, in my opinion, one of the top games we have ever seen at the MTS Centre.

NHL:  Gary Bettman met with the media just prior to the start of the game.  To listen click here.

Pressbox Podcast:  Host Drew Mindell and analyst Richard Pollock break down the Jets play against the Ducks this evening.  To listen click here.