Note:  The team will practice in Anaheim today at 3 pm at the Honda Center.  Be sure to follow @illegalcurve for the latest Jets news.

Winnipeg Free Press:  The Maurice factor.  Pretty clear that when a coach takes a team predicted to finish last in the division and well out of the playoffs and he gets them to buy into his system which in turns gets them a playoff spot and they go from peripheral playoff team to darling Stanley Cup playof pick that the coach is doing something right. 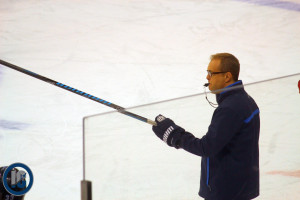 Winnipeg Free Press:  Playoff pieces firmly in place.  The kids are alright and certainly having an impact this season and for Jets fans they hope it will continue into the post-season.

Winnipeg Free Press:  The 23 Musketeers.  It is a pretty unified room behind that Jets logo as each player is always discussing how each guy would do anything for the guy beside him.

Winnipeg Sun:  This one’s for you, Jets fans.  Many fans had faith that the team would one day return to the city.  They never lost faith even after years of rumours and false hope.  One of my closest friends Richard Tapper never stopped believing that the team would return.  He would challenge anyone who didn’t think Winnipeg could support the team.  While he didn’t live to see the Jets in the playoffs thankfully he got to experience the return of the team to the city.  (Pictured below at Game 6 of the 2004 Stanley Cup Finals wearing his favourite Jets sweater.  Lots of “Go Jets Go” from the Calgary faithful inside and outside of the Saddledome). 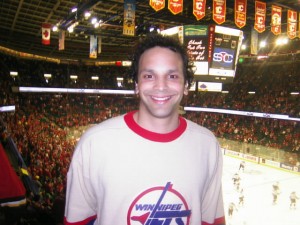 Winnipeg Sun:  Tried and tested.  The Jets for the first time in four years actually have some nice depth throughout the team.  Role players are able to contribute and play more than a superficial role on the team.  Which is important because in the playoffs you cannot simply rely on one or two lines.

Winnipeg Sun:  Young guns driving Jets forward.  They may be young when it comes to games played but coach Maurice doesn’t treat these young guns any different than he does many of the veterans on this team. 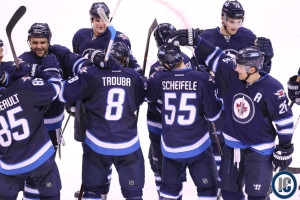 Winnipeg Sun:  Perreault’s availability to Jets still unknown for Game 1 against Ducks.  The Jets bench boss seemed to send a bit of a mixed signal when discussing whether #85 would be able to play tomorrow night.  We will have to wait to see how he comes out of today’s skate and how he looks at tomorrow’s morning skate.

Winnipeg Sun:  How they stack up.  In this article Ken breaks down the strengths and weaknesses of Jets and Ducks.

Winnipeg Sun:  Masked men under the spotlight for Jets and Ducks.  While both teams have had questions marks during the season the Jets were in a better position in the sense that Pavelec was the undisputed stater to conclude the season and was playing some of the best hockey of his career.  On the Ducks side there were a few more questions marks.

Winnipeg Sun:  One-on-one with Mark Chipman.  Paul sat down with the Jets co-owner and conducted this interview in advance of the first playoffs (in this city) for this re-born franchise.

Winnipeg Sun:  Chevy had it in gear for Winnipeg Jets this season.  Many would chide the Jets GM for his lack of moves but when it would come at a cost would it have been wise to make a move simply for the sake of making a move?  Paul writes about his successful year to date.

Winnipeg Sun:  Leading by example.  Many of them signed long term contracts when folks said Winnipeg couldn’t keep their stars.   Players like Wheeler attributed it to a vision that the organization had for the future to win and not just for a year or two but to have long term success.  Now as undisputed leaders on the team it is up to them to try and fulfill that vision. 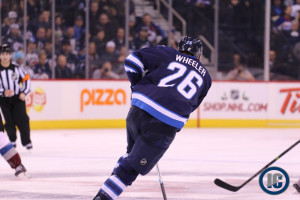 Sportsnet:  Drew Stafford, Tyler Myers grateful for trade.  You know who else is happy about the trade?  All of Winnipeg because these two have been absolutely everything the team could have asked for after the biggest trade made since relocation.

Sportsnet:  Jets, Ducks will be a physical, first-ever series (video).   In a first-ever playoff meeting, the Winnipeg Jets will look to the likes of Blake Wheeler, and use their identity as a physical team to challenge the Anaheim Ducks’ blue line with their combination of youth and veteran presence.

CBC:  Playoff hockey means big payday for True North and local businesses.  The Whiteout has led to a ton of jersey sales and the additional revenue from playoff games means this is going to be quite a season for True North.  Additionally restaurants throughout downtown will be happy with all the patrons who want to watch Jets games with their fellow Peggers.

CBC:  Jets playoff tickets sell out in a flash.  I looked myself online at 10 am and it seemed to me that they were already gone by 10:01 but officially the club is saying it took under five minutes to sell.  There were approximately 1000 seats for sale.

Illegal Curve:  Practice Report.  No changes from yesterday meaning everyone was on the ice except Mathieu Perreault.  Audio from Adam Lowry, Blake Wheeler, Mark Stuart and Tyler Myers.

TSN 1290 Winnipeg:  Hustler & Lawless.  Ed Tait discusses how the Ducks were able to get to top spot in the Western Conference, and how the Jets’ stretch run may have hardened the players to playoff pressure.

TSN 1290 Winnipeg:  Rona Roundtable.  Craig Custance of ESPN discusses the Jets first round matchup vs. Anaheim and previews the first round of the NHL playoffs.  Feels the Jets are like a young St. Louis Blues team.

TSN 1050 Toronto:  TSN Drive with Dave Naylor.  Dave Hodge thinks the Jets will go father than any other Canadian team.

Illegal Curve:  Coach Maurice scrum (audio).  Before the team departed for Anaheim the bench boss spoke to the media about the playoffs, his philosophy and a number of other topics.

Orange County Register:  Ducks pillars Getzlaf, Perry say they’re built to win now.  The Jets are certainly going to see a lot of this dynamic duo during this series.