Note:  The Jets have a huge opportunity to step on the throat of a team that is attempting to chase them when they play the Sharks tonight at the MTS Centre. As always stay tuned to @illegalcurve for up to the minute Jets news.

Winnipeg Free Press:  Maurice not tipping hand on choice of netminders.  He may not be but in an ironic twist of fate fans seem to be clamoring for a return of Ondrej Pavelec.  Who could have foreseen that?

Winnipeg Free Press:  Cavalry arrives in the nick of time.  Coach Maurice must have felt like he was celebrating a birthday yesterday as he got Byfuglien back on the ice in a regular practice jersey well ahead of the original expected return date.  Tyler Myers got the best case scenario and only ended up missing the one game.  Enstrom is expected to be a player and the three injured Jets (Perreault, Little and Chiarot) were all skating hard on a separate sheet of ice. 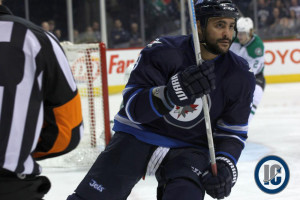 Winnipeg Sun:  Post-game handshakes a symbol of how close this group of Jets players has become.  Good observation by Paul as I hadn’t noticed this new Jets tradition.

CBC:  Byfuglien, Myers could be back in Jets lineup for tonight’s game.  What a luxury for the Jets bench boss to be getting back these two guys at a critical time for the franchise as it attempts to secure a playoff spot for the first time since the return of the NHL to Winnipeg.

Illegal Curve:  Coach Maurice and Coach Cooper discuss the hit on Enstrom.  Not a shocker that each bench boss took a position that defended their player.

Illegal Curve:  Paul Postma suffered injury in 2nd period vs Bolts; out for “weeks”.   He waited 27 games to get his chance and then when he finally does get his opportunity he gets a “significant” injury according to coach Maurice during the 2nd period.  Amazingly he played with the pain and finished the game on Saturday night when the team could ill afford to lose another defenceman during the game.

Illegal Curve:  Practice report.  The team returned to the ice yesterday after a day off on Sunday and here are some observations from the practice at the IcePlex.  As well audio from Byfuglien, Myers and Wheeler.

Illegal Curve:  Coach Maurice from IcePlex.  Roster update (Byfuglien/Myers).  Postma injury news.  Chiarot/Perreault/Little.  Enstrom/Ladd.  When did Postma suffer the injury?  Tough on him to miss all those games, finally get back in and then suffer an injury.  On the style of play.  On tweaking his team’s game.  Uplifting to have Byfuglien/Myers back on the ice?  More injury talk.  On Byfuglien’s quick recovery.  On the Jets goaltending.  How much can the win over Tampa springboard the team for the home stand?  Might we expect to see Myers & Byfuglien as a duo going forward?  On Tampa’s coach Jon Cooper suggesting Tobias Enstrom was largely responsible for the injury.  Does he expect supplemental discipline.  On his team feeling like they belong.

San Jose Mercury news:  Jeremy Roenick weighs in on San Jose Sharks spat.  If you were unaware there is a bit of drama over in Northern California between Jumbo Joe and his GM Doug Wilson that isn’t going away.