Note:  Tune in from noon to 3 pm on TSN 1290 Winnipeg for the Illegal Curve Hockey Show.  Three hours of hockey talk as we break down the 3-1 loss to the Predators, take a look ahead to tonight’s Jets/Wings, review a very busy Jets week and much more.  Guests:  Ken Daniels (Wings Play-by-Play Announcer on Fox Sports Detroit), Mike Harrington (Buffalo News) and Guy Flaming (TSN 1260 Edmonton).

Note II:  With the Blackhawks, Stars, Sharks and Canucks all winning last night there is going to be a lot of pressure for the Jets to pull off a victory over the Red Wings tonight.  Puck drops at 6 pm and be sure to stick with illegalcurve.com throughout the day for updates via twitter @illegalcurve and Facebook.

Winnipeg Free Press:  Jets’ ire genuine after losing.  Sounds like coach Maurice thinks his team takes it too hard when they suffer a defeat.

Winnipeg Free Press:  Mere pain can’t stop Myers.  I’m not sure you can reference a Shea Weber slap shot as ‘mere’ but good for the defenceman being able to soldier on past the pain.

Winnipeg Free Press:  Jets in fine spirits ahead of Red Wings encounter.  Gary writes about the group staying loose as they get ready for a big tilt with the Wings and Jacob Trouba gets ready for a Michigan homecoming. 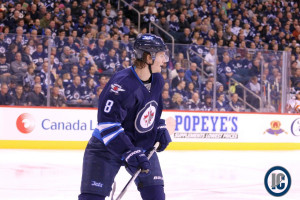 Winnipeg Sun:  Jets take positive outlook into Detroit.  From what the coach and players are saying they like most of the things they have been doing in these last few games and it sounds like Rinne aside they felt like they could have walked away with two points in Nashville.

Winnipeg Sun:  Jets can’t get enough of throwing each other’s stuff in the shower.  Paul writes about the continued shower hi-jinx.  In addition to this he touches on Hutchinson in net, Buff-Chiarot reunited, Chiarot ice time dropping, Missing Bogosian, and Myers ok.

Illegal Curve:  Zach Bogosian thanks city of Winnipeg for warm goodbye.  He had plenty of positive things to say about the city in which he has spent the last four years.  (There is a link to the audio in this post as well as below).

NHL.com:  Bet on Kane could pay off big for Sabres.  Masisak writes about what a healthy Evander Kane could mean for the Buffalo Sabres.  His Super 16 power rankings also has the Jets in 10th spot.

Illegal Curve:  Coach Maurice scrum from Joe Louis Arena.  Following an optional practice yesterday the Jets bench boss addressed the Nashville game, looked ahead to tonight’s game against the Red Wings and discussed the impact of the newest additions to the Jets roster.

Detroit Free Press:  Jets game can’t come soon enough for Howard, Red Wings.  Will the Jets face a rusty Jimmy Howard who hasn’t played in over five weeks since he injured his groin?  Stay tuned to find out.