Note:  The Jets don’t have long to dwell on the 3-1 loss last night to Nashville as they have to get ready for a date with the Detroit Red Wings at Joe Louis Arena tomorrow night.  As always keep it locked to illegalcurve.com for all the latest Jets news via twitter @illegalcurve and Facebook.

Winnipeg Free Press:  Predators’ Rinne robs Jets blind.  The Jets bench boss in his post-game chat seemed to attribute a large part of the loss to his team hitting the posts but the play of Nashville’s #1 netminder was simply sensational and a large part of why his team didn’t get any points. 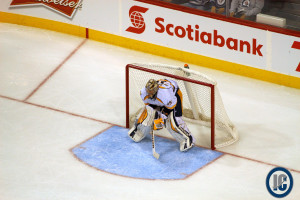 Winnipeg Free Press:  Who won the Kane deal?  As it says in the sub headline this is something that could take years to measure.  Many pundits are giving the Jets the edge in the short term (obviously since Kane isn’t able to play) but there is a lot more to this deal than what happens in just the short term.  In addition to the above you need to factor in whether the Jets re-sign Stafford?  How will the prospects develop?  What happens to the 1st round pick?  On the other side will Kane become that 30, 40 or 50 goal scorer and what becomes of Zach Bogosian?

Winnipeg Free Press:  Fresh start for Myers, Stafford.  After wallowing away on a 30th place team it must come as a breath of fresh air to be in a tough playoff race.

Winnipeg Sun:  New Jets off to rough start.  Once again a parade to the sin bin cost the Jets as the Predators converted two special teams goals which would prove to be enough to get the job done and secure two points.

Winnipeg Sun:  Huge Zach Bogosian fan devastated by trade from Jets.  Lots of fans were upset about seeing #44 being sent East.  Not those same fans would state “his looks” as part of their rational but who knows and who am I to judge?

Winnipeg Sun:  Drew Stafford is the opposite of Evander Kane.  Paul writes about the addition of Stafford to the lineup and how he seems to be a lot less out there than the player he is replacing.

Winnipeg Sun:  Brendan Lemieux looking forward to reuniting with Scheifele and Jets.  He certainly sounds like an earnest young man.  I read a good article about the new Jets prospect written by Oleans Times Herald writer Bill Hoppe about his dedication.

Winnipeg Sun:  Zach Bogosian happy to be going home to try to improve Sabres.  The upstate New York resident will be heading back to the state in which he grew up.  While he grew up a Rangers fan (I believe) it doesn’t sound like it took very long for him to switch allegiance to the Sabres.

The Tennessean:  Predators beat Jets, stay in NHL lead.  Important to remember that the team that beat Winnipeg last night weren’t exactly a group of scrubs.  Read more from Predators side of things.

Yahoo Sports (Puck Daddy):  Jets acquisitions jump into action against Predators.  Josh breaks down the play of the two newest members of the team.

TSN 1050 Toronto:  Drive with Dave Naylor.  GM of the Jets, Kevin Cheveldayoff joins TSN Drive to analyze the trade and discuss the growth of Tyler Myers.

TSN 1200 Ottawa:  In the Box.  Steve and Todd are joined by one of the newest members of the Sabres, Zach Bogosian to talk about his trade to Buffalo, playing closer to home, how he found out about the news, and what he’s looking forward to about playing in Buffalo.

TSN 1290 Winnipeg:  Rona Roundtable .  Brendan Lemieux of the Barrie Colts talks with Rick Ralph about how he found out he was traded to the Winnipeg Jets and shared his excitement to join a new organization.

Coach Maurice – Assessment of the game.  Room post-game felt like a post season game loss.  Did he like the way his team played?  What did he think of the new guys?  How did he like the 5 on 3?  On the shot Myers took from Weber.

GM Cheveldayoff – In the 1st intermission voice of the Jets on TSN Dennis Beyak chatted with Jets GM Kevin Cheveldayoff.  Topics included: Big picture review of what happened yesterday morning.  How important was it to get it done before the off season?  Is there more to come?  Quick scouting report on Joel Armia and Brendan Lemieux. (Runs 2:30)