Note:  After the insanity of the Jets biggest trade since the move to Winnipeg, today’s focus is their central division rival Nashville Predators.  The two teams meet in Music City at 7 pm cst.  The newest Jets will be on the ice with Tyler Myers wearing his usual #57 and Drew Stafford will be reversing his usual #21 (currently worn by TJ Galiardi) and going with #12.  Stick with illegalcurve.com throughout the day for all the latest news with updates provided via twitter @illegalcurve and Facebook.

Winnipeg Free Press:  Anatomy of a deal.  Gary, Ed and Tim offer their collective insight into the each player that they Jets received in the trade yesterday within the context of a cap-world.

Winnipeg Free Press:  Chevy moves boldly to improve his club.  Gary’s article covers how the often maligned for not making any big moves Jets GM has taken the bull by the horns with the trade heard around the hockey world yesterday.

Winnipeg Free Press:  Buff headed back to blueline for Jets.  Despite the success the Jets have had since #33 went up to forward the Minnesota native will be happiest back playing defence.

Winnipeg Free Press:  Stafford looking forward to playoff hunt with Jets.  He is a critical piece in helping provide the Jets with the added forward depth they have needed since Kane went down with his injury. 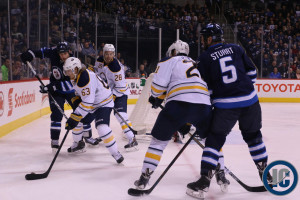 Winnipeg Free Press:  Meet the newest players in the Jets organization.  Lots of people in the hockey world had plenty of praise for the players that will be brought into the Jets family.

Winnipeg Sun:  Breaking down a blockbuster.  Ken gives you some insight into the moves made yesterday and how they will impact this team moving forward.

Winnipeg Sun:  Kane excited to be moving on.  Ken looks at the move from the Buffalo perspective.

Winnipeg Sun:  Cheveldayoff not likely finished as Winnipeg Jets still have glut of defencemen.  I’m not sure my baboon heart which was trying to enjoy the Vegas sun when the news broke is ready for more breaking news!!  However I’m going to have to suck it up as Ted writes that the Jets GM may not be done tinkering before the March trade deadline.

Winnipeg Sun:  Good riddance to Kane say Jets fans.  The young winger had the opportunity to be embraced by Jets fans but just never seemed to make that connection.

Winnipeg Sun:  Chevy’s deal a winner for Jets.  Paul writes about the action taken by the Jets GM and how his moves have upon initial inspection have made the team a winner.

Winnipeg Sun:  Kane, Bogosian merchandise now 75% off.  Something tells me these jerseys won’t last very long as some enterprising Peggers’ will take advantage of those prices.

Buffalo news:  For Sabres, moving day in a big way.  Always important to get the other side of the story and for that we head to the Buffalo News were Sabres beat writer John Vogl gives you the Buffalo perspective.

Globe and Mail:  Cheveldayoff’s first big trade is an outright blockbuster.  Eric Duhaschek looks at the first big move made by the Jets GM.

NHL.com:  Contending Jets address current, future needs.  Patrick breaks down all aspects of the trade including how the Jets have added a lot of depth to the organization with this trade.

TSN:  That’s Hockey (video).  TSN scout Craig Button calls the deal a ”win-win” for the Jets and explains why the additions of Tyler Myers and Drew Stafford helps them now and that the prospects and picks will continue to aid Winnipeg down the road.

ESPN:  Evander Kane on trade to Buffalo Sabres: ‘It’s nice to feel wanted’.  Pierre LeBrun was the first reporter to speak with the now former Winnipeg Jets winger and get his reaction to the news that he had been dealt to Buffalo.

Metro News:  Kevin Cheveldayoff pulls off career-defining trade.  Hustler chimes in with this piece on the swing for the fences move made by the Jets GM yesterday.

Buffalo News:  Sabres GM Tim Murray discusses blockbuster trade with Jets.  If you’d like to hear the other side of the trade you can catch the entire presser held by Tim Murray as he breaks down the deal from Buffalo’s perspective. (runs about 16 minutes).

Illegal Curve:  GM Kevin Cheveldayoff.  Hear how the Jets GM answered questions on the biggest trade he has made as the leader of this organization.

Illegal Curve:  Coach Maurice.  Listen to what the Jets bench boss had to say about the newest additions to his roster, the process of informing his players and much more.

TSN 690 Montreal:  Melnick in the Afternoon.  Hockey analyst Pierre Mcguire likes the change of scenery for both Evander Kane and Tyler Myers.

TSN 1290 Winnipeg:  The Rona Roundtable.  TSN Hockey Insider Darren Dreger discusses how the Jets and Sabres trade came together and why it’s a win for the Jets.

TSN 1200 Ottawa:  The Drive.  Sabres analyst Rob Ray joins The Drive to give the Buffalo perspective on the Evander Kane deal.