Note:   Tune in from noon to 3 pm on TSN 1290 Winnipeg for the Illegal Curve Hockey Show.  Three hours of hockey talk as the guys break down the 2-1 OT loss to the Hawks, a look ahead to Jets/Avalanche, the Evander Kane situation and much more.  Guests:  Jeff O’Neil (TSN), Mike Greenlay (Color Analyst on TV for Wild) and Mike Chambers (Denver Post).

Winnipeg Free Press:  Jets deep-sixed in sixth straight.  While moral victories don’t get you points I’m sure the Jets bench boss was happy with the way his team played last night. 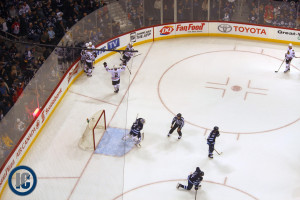 Winnipeg Sun:  Jets lose battle with the Hawks.  Despite the OT loss, the good news is they have taken seven of eight points against their tough central division rival.

Globe and Mail:  All about the Kanes in Chicago’s overtime win over Jets.  It was certainly an eventful evening.

ESPN Chicago:  Rapid reaction.  Plenty to digest from that game last night.  Scott does that for you here.

CSN Chicago:  Five Things from Blackhawks-Jets: Carcillo answers call.  Tracey gives you some post-game thoughts including Patrick Kane continues to dazzle, Daniel Carcillo answers the call, Crawford’s returning to form, The Jets can deal with adversity and If these two played in the postseason, it would be fantastic.

Chicago Tribune:  Blackhawks snap scoreless streak with 2-1 victory over Jets in overtime.  The Hawks were struggling getting some goal scoring although that Patrick Kane goal to tie it up makes you wonder how this team ever has a problem getting goals.  Read the recap from a Hawks beat writer.

Winnipeg Free Press:  Trade may be only way.  At this point it seems to be the only reasonable conclusion however you have to do it without a gun to your head.  Many pundits are suggesting this trade won’t happen until the summer.

Winnipeg Free Press:  Buff pours cold water on clothing accusation.  Is anyone surprised that the team has closed ranks at this point and won’t feed the fire?

Winnipeg Sun:  Game over for Kane.  Paul writes how, despite comments to the contrary, fans have likely seen the last of Kane in a Jets uniform.

Winnipeg Sun:  Fans ready for life after Kane.  We saw some fans have already converted their #9 Kane jerseys into #19 Slater jerseys with some duct tape.

Winnipeg Sun:  Jets are a better team with Kane in the lineup.  You can’t argue with the fact that the winger makes this a better team.

Winnipeg Sun:  There’s no conspiracy: Kane’s agent.  Hard not to add 2 + 2 and get 4 in this situation.  Of course he is doing damage control for his client so he will say whatever needs to be said to help him move forward.

Winnipeg Sun:  Kane bullied? No, experts say.  Locker room culture is just different than the real world.  Some may not like that but it is just a fact of life.

Sportsnet:  7 potential trade destinations for Kane.  Taking a look at some of the spots where the Jets could send the rugged winger.

Illegal Curve:  Afternoon links.  Following word that the 23 year old winger was having surgery there was plenty of more reaction which can be found here.

Illegal Curve:  All the latest Kane news.  I compiled all the news about Kane prior to word breaking of his surgery.  Lots of trade speculation links here.