Note:  The Jets are in Calgary to take on the Flames in the first game of a back-to-back tonight at the Saddledome.  The Jets have lost three straight game whereas the Flames once again came from behind and scored another 3rd period comeback win over Alberta rival Edmonton on Saturday.

Winnipeg Free Press:  Zach Bogosian regrets slashing penalty on Saturday that got him benched.  While they weren’t the smartest penalties he could have taken the importance will be to see how Bogosian plays tonight and if he is able to play a smarter, more controlled game. 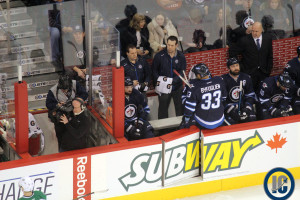 Winnipeg Sun:  Heat from the Flames.  Feels like we are about to have a good old Smythe Division rivalry night as Winnipeg looks to end their losing streak against a hot Calgary team trying to catch them in the standings.

CBC:  Jets face penalty trouble.  When you are the most penalized team in the NHL there is a fine line between acceptable and unacceptable penalties.  Jeff also writes about Hutchinson looking human and Bogosian stick work.

TSN 1290 Winnipeg:  Third line providing depth and scoring.  Paul switches from the microphone to the pen as he wrote this column on the producing that coach Maurice has received from his newly formed third line.

Illegal Curve:  Coach Maurice scrum (audio).  After a night to digest the game, what are his reflections?  Was it simply a difference in special teams?  Did he like his team’s energy?  Any correlation between the All-Star break and the losing streak.  Unleashing the fury in the 1st period.  Is parking people on the bench a good way to curb selfish penalties?  On Bogosian taking full responsibility for his mistake.  Can they use this game as a springboard?  Did he look at Byfuglien’s fake bite?  How did the Jets end up with a 5 on 3 against during the Byfuglien scrum.  On guys making icing switches.

Calgary Herald:  Hard-luck wingers starting to find the net.  Always helpful to a team when your role players are helping to contribute.

Calgary Sun:  Five burning questions.  If you want to learn about the Jets rivals here are some answers to some of the questions you may have about Calgary.