Note:  The Jets look to reverse the two game mini slump as they get back to the friendly confines of the MTS Centre tonight against the Dallas Stars.  Plenty of content to come on site so be sure to stay updated via twitter @illegalcurve and the Illegal Curve facebook page.

Note II:  Tune into the Illegal Curve Hockey Show on TSN 1290 Winnipeg from noon to 3 pm as the guys talk about the recent road woes, preview tonight’s Jets/Stars game and take a look around the rest of the NHL.  Guests:  Mike Heika (Dallas Morning News) and George Johnson (Calgary Herald).

Winnipeg Free Press:  To trade or not to trade.  I guess I will finish it off and say ‘that is the question’ as Jets fans wonder if the Jets GM will be adding some scoring touch to the team’s top 9 as they look to make a playoff run.

Winnipeg Free Press:  Jets aim to simplify and get back to winning.  No reason to let panic set in after a couple of games.  The Jets top line has been pretty consistent and you have to expect that coach Maurice is going to reverse any bad tendencies that crept into their game the last couple of games.

Winnipeg Free Press:  Analyze this.  Taking a look at the Jets analytics and what they say about this team.

Winnipeg Sun:  Jets 0ver-thinking it?  Little has been one of the most consistent Jets and talks about how the team may be over-thinking what is in essence a pretty simple concept. 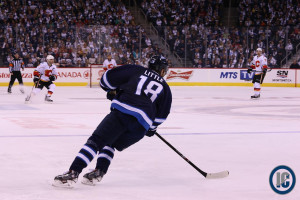 Sportsnet:  Little thinks Jets’ top line will bounce back.  If the Jets want to keep their playoff spot buffer they will need their top three to step up their game.

Illegal Curve:  Coach Maurice scrum (audio).   Trying to figure out what has gone wrong last few games.  What have they gotten away from as a team?  Is it a blip with the top line after last two games?  How long does it take to get top six back to being a cohesive group?  What does he attribute Perreault’s  success since mid November?  On Perreault’s personality.  Is Evander Kane playing a different style of game and is that his handiwork?  Players using word ‘playoffs’ does he use that word?  How is Kane?  Is it about players getting to certain spots on the ice?

TSN 1290 Winnipeg:  The Big Show (audio).  Paul Edmonds addresses some of the defensive issues that have cropped up, and says teams are now better prepared for what Winnipeg is bringing to the table on a nightly basis.

Dallas Morning News:  Stars-Jets scouting report: To catch Winnipeg in standings, Dallas needs a win. It looks like an insurmountable lead for Winnipeg but Dallas could make it more interesting with a clean two point win here.