Note:  The Jets returned to Manitoba following a tough trip through Pennsylvania.  Dropping a 5-3 game against Pittsburgh on Tuesday and a 5-2 decision to Philadelphia last night, Winnipeg will have to turn things around as they get ready to face the Dallas Stars on Saturday night.  They hit the ice at the MTS Centre at noon today.  As always, stick to @illegalcurve for the latest Jets news.

Winnipeg Free Press:  Jets need their Rocky Balboa.  It may be more mental than physical toughness that gets tested as the team tries to bounce back from two straight losses (although as Anthony Peluso demonstrates the Jets aren’t lacking in the latter area).  Ed also writes about the 1st line being under the microscope, Byfuglien vs. Berube part deux and notable numbers. 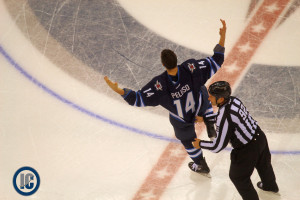 Winnipeg Free Press:  Quaker State shakes up Jets.  As a quick aside that may be my favourite headline of the season.  Ed brings you up to speed on the mindset of the Jets bench boss following that game.  If you really listened to what the coach had to say it was clear he didn’t get too high during the five game winning streak and similarly will not get too down with a two game losing streak.  This quote jumped out at me “Wasn’t that good before the break.  It’s not as far off as you think here….it’s always feels more extreme than it is.  It’s just not that extreme”.

Winnipeg Sun:  Jets fall to Flyers.  Ken writes about the bench boss not allowing two straight road losses get him too worried about his team in addition to Ken breaking down the game.

Globe and Mail:  Schultz scores rare goal as Flyers dump Jets.  Anyone expect the game winner to come off the stick of a player who hadn’t scored in more than 125 games?

Philadelphia Daily News:  Flyers outscore Jets for third straight win.  A look at the game from the Philadelphia perspective.

Illegal Curve:  Do the Jets have interest in Leafs Daniel Winnik?  TSN Insider Trading panel looked at this topic during the 1st intermission of the game last night.

Illegal Curve:  Coach Paul Maurice post-game press conference (audio).  Able to battle back from the deficits early on but couldn’t do it later in the game.  Gave up a few too many odd man rushes?  Is there an adjustment period when you get your top six together for first time?  Had it going so well before the All-Star break, what is wrong now?  Is it good that they were able to get wins before break so they are still right there?  Fact that they have been so resilient, is that something to lean on?  Need to improve 5 on 5.

Winnipeg Sun:  Brandon Wheat Kings and Portage Terriers having magical hockey seasons … Jets have draft gems.  Plenty of Junior hockey talk from Ted and while it only touches on the Jets, an interesting read from a Manitoba perspective.