Note:  Tonight we have a rare 8 pm start time for the Jets as they take on the Blue Jackets in the final game before the All-Star break.  Stick with us throughout the day for the latest Jets news via twitter @illegalcurve and Facebook.

Sportsnet:  30 Thoughts.  Friedman touches on the Jets in points 5 (Leafs adapting like Jets did under Maurice), 13 (decisions on re-signing Byfuglien & Trouba) and 16 (Heritage Classic for next year).

MyToba.ca:  Playoff hopes hinge on more than faceoff and power-play success.  Scott talks about whether being marginal in some areas can be offset by another and therefore still result in success.

Winnipeg Free Press:  Outdoor game wasn’t a fit.  While some fans seem to want to tar and feather the Blue Bombers the reality is they are a business and have to do whatever they can to turn a profit.  They cannot do something as big as the Heritage Classic if in the end it is going to hurt their bottom line. 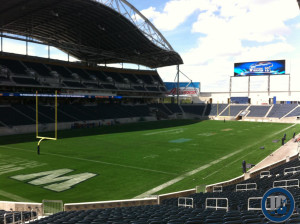 Winnipeg Free Press:  Outdoor Heritage Classic game postponed until 2016.  Gary broke the news on Tuesday that the city won’t be hosting the festivities next season.

Winnipeg Free Press:  Trouba could be cleared tonight.  While I’m not surprised that another Jets player is ready to go well ahead of the original schedule I am somewhat surprised that the team wouldn’t just give him another six days off and wait until the Flyers game on the 27th.

Winnipeg Free Press:  All-Star Buff finds home on D.  Coach Maurice has a luxury few other coaches in the NHL posses with a player like Dustin Byfuglien.  Especially a Buff who has bought in completely to his coach’s system.

Winnipeg Sun:  A nice problem to have: Addition of Jacob Trouba makes Winnipeg Jets blue-line crowded.  Plenty of red jerseys on the ice at practice as the Jets D core returns to full strength.  Sounds like coach Maurice’s biggest issue may be trying to figure out how to get all these defencemen to play less minutes than they are used to playing. 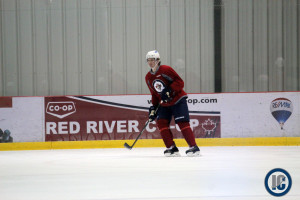 Sportsnet:  Jets, Byfuglien happy with move back to defence.  A happy Byfuglien is a very good thing for this Jets team.

Illegal Curve:  Heritage Classic in Winnipeg has been postponed.  Fans have been speculating about which NHL team would be the best opponent for the Jets.  Unfortunately for them an inability to come to terms between the Bombers, Jets and NHL has ensured that the event would have to be delayed at least one season.

Illegal Curve:  Jets coach Paul Maurice scrum from MTS IcePlex (audio).  Will Trouba be in tomorrow?  Did he look like he would be good that if he gets cleared he would play tomorrow?  Is Mark Stuart dealing with something?  Thoughts on what Byfuglien is doing?  He will remain on the blue line?  Fair to say Byfuglien exceeded his expectations?  Are there new parameters that have made it easier for Byfuglien to succeed?  Will special teams allow him to redistribute time for the defence?  Update on Perreault and comment on suspension.  What is he expecting from Columbus and how do they match up?  Does the team have to go through an adjustment to the success and consistency they have found?  Is there a different air “the Jets are coming” are you becoming a tougher team to beat?  Too soon to look at playoff odds?  How many other players could do what Dustin Byfuglien/Brent Burns type players in the NHL?  Is he satisfied with having 58 points with one game to go before All-Star break?  Any concern about keeping focus last game before All-Star break?

Illegal Curve:  Jets get Jacob Trouba back; What to do with excess defencemen?  We will find out today if #8 is back for the team.  Of course while we talk about defensive depth and what the team might do with extra defencemen like Pardy and Postma when coach Maurice delivered news that Stuart is nursing something.

TSN 1290 Winnipeg:  Hustler & Lawless (audio).  Kerry Fraser joins the guys to explain how poor positioning led to referees missing the call for Daniel Carcillo’s hit on Mathieu Perreault. Fraser says refs need better coaching to fix positioning, and that the NHL got the Carcillo suspension right. Fraser also weighs in on a coach’s challenge in hockey.

TSN 1290 Winnipeg:  The Rona Roundtable (audio).  TSN Hockey Analyst Craig Button discusses the Jets problem of having too many healthy defensemen, discusses some of the prospects in the team’s system and the Jets chances at a top three spot in Central.

TSN 1290 Winnipeg:  The Rona Roundtable (audio).  Willy Palov of the Halifax Chronicle Herald discusses Jets prospect Nik Ehlers’ season and what the future holds for the first round pick.

Columbus Dispatch:  Respite in Winnipeg.  All you want to know about the Jets opposition from beat writer Shawn Mitchell.