Note:  Not a tremendous surprise that coach Maurice is giving his troops the day off today following a grueling schedule.   Jets return to the ice on Tuesday at the IcePlex at 11 am.

CBC:  Playing on the edge, Jets key to success.  Jeff writes about the Peluso tilt with Bickell being a game changer and then switched to how the Jets have played on the edge which isn’t pretty, but effective.  Touches on their penchant for taking penalties as well.

Winnipeg Free Press:  A Little goes a long way.  I said it after he scored the opening goal of the game and after his shootout winner but I think it’s safe to say that if he can continue to produce like he currently is (3 goals, 3 assists in last seven games) than he may be allowed to skip practice permanently.  Tim also writes about the standings, the obstacle and the absent. 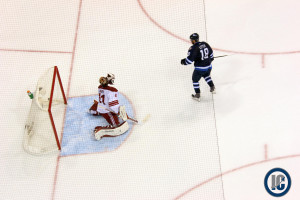 Winnipeg Free Press:  Jets having tough time with late-game goals.  Last night was the third time since a December 11th game against the Colorado Avalanche that the Jets blew a 3-1 lead in the 3rd period.  They did it against the Philadelphia Flyers on the 21st of December and then again yesterday.  The difference last night was they managed to hold on for the win.  Of course as Tim points out that is a bit of nit picking since the team overall has been pretty solid in maintaining leads for the most part.

Winnipeg Free Press:  Exhausted and satisfied.   The schedule has been the topic of conversation for the past few weeks and while it clearly took every ounce of their strength to finish off the seven games in 11 nights the team didn’t just manage but they thrived going 5-1-1 over that stretch.

Winnipeg Sun:  Jets hold off Coyotes in shootout.  What looked like it would be a comfortable win by the Jets was made a bit more difficult by an Arizona team that was playing 24 hours after a touch loss in St. Paul.  Ken breaks down the game in this column.

Winnipeg Sun:  Little makes presence felt for Jets.  He continues to play at an extremely high level in such an unheralded fashion. 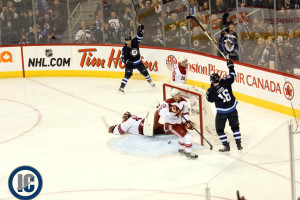 Illegal Curve:  Perreault doesn’t have a fracture, will miss some games.  There were plenty of developments on Sunday as we get closer to hearing about the fate of Daniel Carcillo for his hit on Mathieu Perreault on Friday night.

Pressbox Podcast:  Host Drew Mindell and analyst Michael Remis break down the Jets play against the Coyotes this evening.