Note:  No rest for the weary as the Jets left Texas following an exhausting and improbable 2-1 win over Dallas.  They landed in Illinois around 1:30 am for a date tonight with Chicago.  Game time is 7:30 pm in the windy city as the team looks to keep their winning ways alive against a rested Hawks team.

CBS Sports: Dustin Byfuglien has been a human wrecking ball lately. Sometimes you just need to watch what happens to the folks at the receiving end when they have been Byfuglien-ed. Easily my favourite one is the Doughty/Kopitar double take out. If this was Festivus those would be impressive feats of strength.

TSN:  Dreger Report.  Second item in the report covers the Jets bench boss and his milestone.

Winnipeg Free Press:  D-zone change of direction exit (video).  J.P is back and he’s brought his whiteboard to show you this exercise.

Winnipeg Free Press:  Star-strangled banner night.  Last night was the Ondrej Pavelec show.  The Jets are not leaving Dallas with two clean points without the effort he put forth.  He stood on his head while the team stood around. 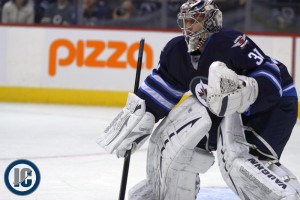 Winnipeg Sun:  Pavelec outshines Stars.  Ironically the players have been talking about winning one for Pavelec because he deserves it but last night it was on the Jets net minder to win the game almost by himself.

Dallas Stars Morning News:  ‘Utter domination’ from Pavelec leaves Stars in even bigger playoff hole.  When you can be dominated by an opponent and still leave their barn with two points it is quite demoralizing.  Especially to a Stars team that was trying to close the gap between themselves and the Jets.  Read about the game from Dallas beat writer Mike Heika.

CBC:  Fur-coat clad dancing Winnipeg Jets fan video goes viral.   Good for him for having some fun with it.  He would have gotten extra points in my book if he pulled off a Supertroopers “Meow” during his interview.

Illegal Curve:  An update on Jacob Trouba’s injury progress.  We get an update on the Jets sophomore defenceman and whether he may be back ahead of the February projection.

TSN:  Insider Trading (video).  TSN Hockey Insiders Darren Dreger and Pierre LeBrun start talking about the Jets potentially being buyers at 1:20.  Goes for about a minute.

TSN:  Jets rewarded for smart free agent decision on Perreault.  Fans of the team will read this article with glee.  (You can hear Yost chatting about his articles on H & L below).

ESPN:  Top 50 NHL prospects (paywall).  If you can read the article by ESPN’s Corey Pronman he is very high on the Jets top end talent in this list as Winnipeg has three players (Ehlers, Petan & Morrissey) in the top 15 of his rankings.  He also ranks the goalies separately and Winnipeg has two (Hellebuyck & Comrie) in the Top 10.

TSN 1290 Winnipeg:  Hustler & Lawless (audio).  Travis Yost joins the guys to talk about Mathieu Perreault’s performance and high analytics values. Yost says Perreault is among the highest in the league in generating shots within 5-7 ft of the opposing net. Yost says Winnipeg Jets GM Kevin Cheveldayoff should be congratulated for signing Perreault, especially from an interesting situation in Anaheim. Yost anticipates the Jets remain competitive in the Western Conference and credits Dustin Byfuglien’s return to blueline with playoff spot.

Illegal Curve:  Dallas Jumbotron strikes back Part Deux.  The folks at the American Airlines Center had some more fun putting together a list about Winnipeg.

Illegal Curve:  Coach Maurice post-game.  It was the Ondrej Pavelec post-game scrum as he was the only player coach Maurice wanted to discuss with the media following that impressive performance by the Jets goalie.

Chicago Sun-Times:  Division games of Central importance as Hawks hit second half.  Unlike the Jets, Chicago has been off since a 4-1 win over Minnesota on Sunday.  This team sounds very ready for Winnipeg.  Plenty to learn from a Hawks perspective in this article.

ESPN Chicago:  Teravainen getting comfortable, relying on instincts.  Sounds like he is ready to produce.  Will he get it done against the Jets?