Note:  The Jets are in Dallas tonight at 7:30 pm to take on a Stars team that currently sit seven points back of Winnipeg with two games in hand.  The Jets are coming off a big 8-2 win at the MTS Centre on Tuesday night while the Stars had a come from behind win over the Senators at American Airlines Center as they held on to a 5-4 win.   As always stick with@illegalcurve for all the latest Jets news.

Winnipeg Free Press:  Nice blowout. Now forget it.  No point looking backwards in the NHL at what you have accomplished.  Always looking forward at the next challenge.

Winnipeg Free Press:  Jets playoff payoff would be huge.   Both literally and figuratively.   Of course for many players on this roster who haven’t played meaningful post season hockey the experience of a seven game series would be massive.

Winnipeg Sun:  Jets not getting too excited.  While the 8-2 blowout win was nice for fans at the MTS Centre the Jets aren’t that far removed from a one win in five game stretch from the 29th of December to the 8th of January.  While they have won two of their last three and have points in all three contests the team has learned under coach Maurice not to get too high (and conversely too low) following a win or loss.

Winnipeg Sun:  Thanks (nearly) a million.  The entire prospect of a Manitoban being able to win 1 million dollars if a player scored five goals seemed so inconceivable prior to December 5th, 2014 when the team hadn’t even recorded a hat trick.  39 days later they have two the latter of which almost made Gail McDonald a very very big Mathieu Perreault fan.  As it is she sounded (listen here) quite happy and slightly overwhelmed by the response.

Globe and Mail:  Yes, the Jets are the real deal.  More and more people outside our fair province are taking notice of the not so little team on the prairie.   Mirtle writes about the Jets and why it looks like this success isn’t a mirage. 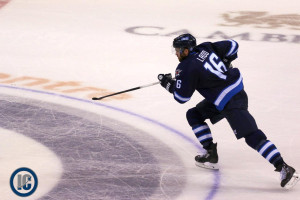 Globe and Mail:  Paul Maurice reaches a significant coaching milestone.  I always enjoy when Eric Duhatschek puts pen to paper and Winnipeg fans get to enjoy this one he wrote about the Jets bench boss.

Metro News:  Control in Central key to Jets playoff push.  Winnipeg is going to have to show they can hold their own within the division if they want to make the post-season.

ESPN:  Maurice give Jets reason to smile.   Scott Burnside takes a turn to write about the impact Coach Maurice is having on the Jets.

TSN:  Statistically Speaking (video).   The Jets will visit the Stars looking to widen the gap between them in the Central Division and with their health getting back to 100% and an edge between the pipes, they may have the advantage. Scott Cullen has more.

CBS Sports:  Eye on Hockey – Byfuglien’s move back to defense boosting Jets.  Chris writes about how the injuries on defence resulted in a unusual boost for the team.

Illegal Curve:  What happens to the hat trick hats?  While the Jets are still trying to create a hat trick hat policy we wonder what fans think should be done with the hats tossed onto the ice?

Dallas Morning News: Lindy Ruff could be shuffling again and could be changing goalie. Lots to be learned about the Jets opposition tonight from team beat writer Mike Heika.

What happens to the hat trick hats?
Game 45: Jets vs. Stars projected lines