Note:  The Jets won a wild one last night over the Kings and now have another big game against the Ducks tonight in Anaheim.  It is a special night as the Ducks will be retiring Teemu Selanne’s jersey and there will be an hour long pre-game ceremony for the Finnish Flash.  As always stick with @illegalcurve for the latest Jets news.

Winnipeg Free Press:  Returnees lift Jets to win.  Not a moment too soon as this team needed the two points they secured last night.  Ed breaks down the entire game. 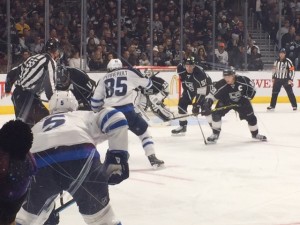 Winnipeg Sun:  Jets crown Kings in shootout.  It was a slick goal by Bryan Little (who was second on our poll of player who should represent the Jets at the All-Star game) and the team didn’t wilt when they blew a three goal lead.  Ted assess the game in this column.

LA Times:  Kings lose to Jets, but comeback isn’t completely pointless.  Of course that point comes at a big price as the team lost Tanner Pearson with a broken left ankle during the second period.  Lisa breaks down the game from the Los Angeles perspective.

Sportsnet:  3 shots 3 goals for the Jets to start game (video).  Watch as the Jets score three goals on their first three shots of the game, before the Kings even register a shot of their own.

Illegal Curve:  Dustin Byfuglien chosen to represent Winnipeg Jets at 2015 All-Star game.  No player is better suited to represent the Jets.  Fans on our site felt he was the best candidate (38%).  You can hear ‘Big Buffs’ thoughts in this post.

Illegal Curve:  Coach Maurice post-game.  Quite the hockey game!  Nice to get some early ones following the game in Arizona?  What does it say about his team to pull out the win?  Not quitting on the game.  Thoughts on Adam Lowry and his faceoffs.  What did he think of the three returned players?

Instagram:  Slow motion of Bryan Little’s winner.  Check out a member of #JetsArmy at the Staples Center who caught the game winning goal from Little.  Pretty cool video.

ESPN:  The deal that changed Selanne’s life.  Barry Melrose (video) chats about the type of player and person he is, in addition to an article about him.

Globe and Mail:  Selanne’s special night has been a long time coming.  Tonight will be a special evening for the Finnish Flash, a player who meant so much to both communities.