Note:  It was a great night of hockey last night.  Not because the Jets won 5-1 but because of the rivalry between Jets and Leafs fans and the dueling chants that occurred throughout the evening.

Note II:  The Jets return to practice today as they have to switch their focus to tomorrow night’s game against the San Jose Sharks.  As always get the latest Jets news from @illegalcurve.

Winnipeg Free Press:  Defensive duo finds chemistry.  It was a mutual admiration society in the dressing room following the game as both Chiarot and Byfuglien were effusive in their praise of the other.  The two have had a ton of responsibility with all the defensive injuries and they have sure stepped up to the challenge.

Winnipeg Free Press:  Buff takes charge against Leafs.  It was the Dustin Byfuglien show again last night and all the fans at the MTS Centre were loving the performance from the Minnesota native.  He was dominating in all zones and led the team to a huge Hockey Night in Canada victory. 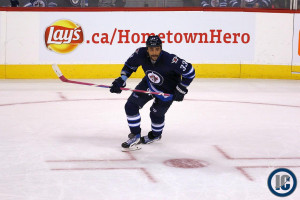 Winnipeg Sun:  Jets live up to new mantra.  Paul’s column starts with the Jets mantra of not allowing a losing streak to get out of hand. Also includes a part about the Leafs jerseys tossed on the ice, the Byfuglien effect, Reimer taunt, the glove love that van Riemsdyk lost glove received and ends with a Leafs sweater count.

Winnipeg Sun:  Galiardi ends dry spell.  It had to come as some relief for him to finally get a chance with the Jets 3rd line and to capitalize on the opportunity.

CBC:  Yet another Leafs jersey hits the ice.  The first one drew a lot of attention but the second one was left on the ice for quite awhile as only Michael Hutchinson noticed it since the play had been whistled dead in the Leafs zone.  They also missed the fan toss his Leafs jersey from the upper deck only to have it fall on a fans head, well short of the ice. 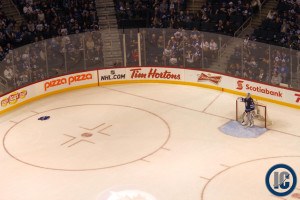 Toronto Star:  Leafs flop vs. Jets in road trip finale.  A look at the game from the Toronto coverage.

Sportsnet:  ‘After Hours’ (video).  Ben Chiarot talks with Scott Oake about his first NHL goal and what his expectations were when he was called up to the Winnipeg Jets.

Minneapolis Star-Tribune:  Jets, with big road following, could ruin Wild’s home finale.  Who knew Jets fans were so fearsome?  Looks like you guys managed to instill some fear in folks down South with all the energy you brought to the last game in St. Paul.  So much so that they are trying to think of ways to prevent the Jets ‘home ice’ advantage that fans bring with them from Friendly Manitoba.  If last night showed us anything its that the rivalry between fans in the same building can only serve to increase the atmosphere.

Pressbox Podcast:  Host Drew Mindell and analyst Richard Pollock break down the Jets play against the Leafs this evening.