Note:  It was a tough clean two points lost last night but the Jets certainly can’t be feeling too badly having been on a terrific run securing points in 13 of their last 15 games.  This isn’t a team that is used to losing in regulation.  They return to the ice for a 12 noon practice today in advance of their New Years Eve (4 pm start) game against the Islanders.

TSN:  C’mon Ref.  It is clear Jets fans are still unsure about that game tying goal that Vanek scored against Winnipeg on Saturday and former NHL ref turned TSN analyst gives you his insight into what should have happened.

Winnipeg Free Press:  Pressure to compete rising.  The luxury of playing those Eastern and sub .500 teams is coming to an end as the Jets will be playing a lot of Western and + .500 squads to finish off the season.  Gary’s column covers the Jets ability to make the playoffs will be reliant on them competing each and every night.

Winnipeg Free Press:  Jets can’t use bad luck as an excuse for loss to Wild.  Minnesota was able to suck the life out of the MTS Centre yesterday as the Jets numerous mistakes ended up costing this team a potential clean two points against a division rival. 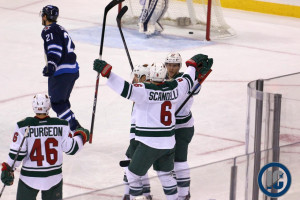 Winnipeg Sun:  Jets come up short.  It wasn’t something we are used to seeing.  The team giving up three straight goals in the 2nd period to blow a lead and the game.  The third goal against with 11.4 seconds to go in the 2nd seemed reminiscent of last year’s squad.

Winnipeg Sun:  Byfuglien playing ‘elite’ defence.  It would be difficult to imagine that this team would be having the level of success they have had since all the D have been injured without the contribution of the big guy.

CBC:  Jets left shooting blanks in gunfight with Wild.  It certainly didn’t look that it would be this way after the 1st period but as Jeff writes the mistakes proved costly and then the Wild went into protection mode.

Sportsnet:  Chiarot headbutts Pominville (video).  Not much of a headbutt.  Surprised someone isn’t talking about the Vanek header whereby he used his head soccer style to knock the puck out of the Wild zone.  That is something you don’t see everyday.

Illegal Curve:  Evander Kane out until February.  As if the Jets couldn’t get any more injury news the winger took a friendly fire shot from defenceman Jay Harrison on Saturday night that will have him on the shelf for five weeks.