Note:  The Jets return to the MTS Centre to close out 2014 with a game tonight against the Wild and on Wednesday afternoon (4 pm start) against the Islanders.  As always we will have plenty of coverage before and after the game so keep up to date with the latest Jets via our twitter account @illegalcurve.

Winnipeg Free Press:  Cope and Hope.  Gary’s column is a reflection on 2014 so it covers more than the Jets but items one, seven and nine are related to your home town hockey team.

Winnipeg Free Press: Ladd’s winner a work of art for the Jets.  Almost somewhat more amazing was that his missed shot on net actually counted as the only Jets shot of OT.  Not leaving the bench after getting an errant Cooke high stick showed that the Jets captain wasn’t prepared to sit it out.  I suspect that is part of what coach Maurice is referencing when he talks about ‘compete’.

Winnipeg Sun:  Jets in playoff spot, but stress still plenty of work ahead.  No taking your foot off the gas pedal at this point in the season.  Even with the top of the conference within reach so is the outside of the playoffs.  Having said that one can only imagine the atmosphere at the MTS Centre when the Jets make it into the post season. 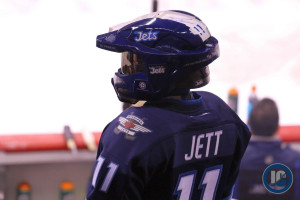 The Hockey News:  Paul Maurice’s Winnipeg Jets are flying high on playoff push.  More and more people around the hockey world are taking notice of the story that is happening on the prairies.

NHL.com:  Wild aim to end losing streak on visit to Jets.  Patrick gives you the season series, Wild team scope and the Jets team scope in his morning article.

Illegal Curve:  Evander Kane misses practice; Jets call up Patrice Cormier.  The Jets winger took a Jay Harrison shot in the 3rd period of Saturday’s game.  We should have better idea following morning skate whether or not Kane will play tonight.  Cormier was called up for insurance.

Illegal Curve:  Coach Maurice scrum (audio).  Update on Perreault/Kane.  Is he hopeful that Kane will play?  Last night’s game.  Does he notice the stretch passes being used against his team and does he think it is a result of teams trying to take advantage of the Jets injuries?  Change in confidence?  On the success being the best since the return of the Jets.  What is the transformation that he has seen in Clitsome’s game?  Updates on the injured defencemen.

Minneapolis Star-Tribune:  Kuemper ready to return, but Wild still missing four others.   Things have gone from bad to worse for the Wild who are dealing with even more injuries following the game against the Jets on Saturday.  The good news is goalie Darcy Kuemper will be back and ready to face Winnipeg tonight.