Note:  The Jets return from a modified road trip (with the three days off for Christmas) having won both road games against the Blackhawks and Wild.  Fans will be happy to see that while there is a lot of season left to go Sports Club Stats has the Jets odds of making the playoffs up to 79.9% following last night’s OT victory.

Note II:  Lots of fans have been asking about the third and game tying goal the Wild scored on the power play in the 3rd period.  I watched the replay numerous times and was convinced the puck went post, top mesh and then out (i.e. a good goal).  However I then saw this video from veteran broadcaster Joe Pascucci and now I’m less convinced that it went in.  If push came to shove I would still think it was a good goal although I am surprised it wasn’t reviewed.  What do you think?  Good goal?

Winnipeg Free Press:  A touch more Hutch.  Following the win he told the assembled media that it “Doesn’t matter what the rotation is or who is playing as long as we win. That’s the main thing.”.   Coach Maurice was coy about who the starter will be on Monday.  I suspect he will return to Pavelec rather than riding the ‘hot hand’ but we will have to stay tuned to find out which goalie will be between the pipes at the MTS Centre in the re-match with the Wild.

Winnipeg Free Press:  A few horseshoes don’t hurt.  It wasn’t the prettiest win by the Jets which ended with a very unusual OT bounce.  Regardless of how they won the game the Jets add another two points in the standings banks (giving the Jets 45 points, 5th spot in Western Conference and tying them for points with St. Louis).  Sets up another big game on Monday against the Wild.

Winnipeg Sun:  Wild ride for Jets.  While collectively it wasn’t the best game the Jets got lots of good production from players like Kane, Little and Wheeler.  Important also to get a goal from Adam Lowry.  Full credit to the 1000s of Jets fans who made the trek to St. Paul to support their team.  Paul writes about the wild win by Winnipeg. 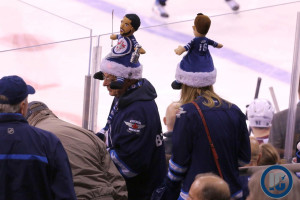 Minneapolis Star-Tribune:  Ricochet goal lifts Winnipeg over Wild in overtime.  You can read the assessment of the game from columnist Michael Russo who covers the Wild and watch his ‘Wild Minute’ recap video.

Sportsnet:  Jets season looking magical (video).  Fluky bounces made their mark and went the Winnipeg Jets’ way in overtime as they continue to surprise the NHL in what is beginning to look like a magical season.

Coach Maurice post-game scrum (audio):   As ugly as some players described it?  How does he account for the territorial advantage by Minnesota?  How does he think his goaltender played?  Does he want to share his goalie plans for Monday?  What did he think of the OT winner?  On the Minnesota disallowed goal.  Did they test Curry enough?

TSN:  Comrie shines in shutout (video).  Jamie McLennan explains what impressed him about Eric Comrie’s play in the shutout against Germany.