Note:  It was a wacky day on Thursday with all the injury news that came out of the MTS Centre.  But there is a game tonight so no time to rest for Winnipeg facing the Colorado Avalanche, who are playing the second game of a back-to-back.  Game starts at 7 pm but be sure to keep it locked here all day for all the latest Jets news.  As always ensure you follow us on Twitter @illegalcurve.

Winnipeg Free Press:  What Sophomore jinx?  Trouba got off to a slow start but he has been getting better and better as the season moves forward.  He had a big three point night against the Oilers and appears to have put talk of a sophomore jinx aside.

Winnipeg Free Press:  One-half of Jets blue-line suffering injuries.  When it rains it pours.  If one injury update wasn’t bad enough for Jets Nation coach Maurice added a second and third to really knock out the core in one press conference.

Winnipeg Sun:  Can Winnipeg Jets keep up fine defensive play with Byfuglien on the blue-line?  There was a buzz at the MTS Centre yesterday when Byfuglien was seen in a red practice jersey.  It is going to be a big test with the big man back on the point. 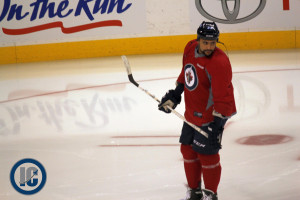 CBC:  December a make-or-break month for Jets.  Jeff writes about the importance this month could have on the Jets entire season and how the team will need to take advantage of some home cooking if they want to find success.

TSN:  Statistically Speaking – Trouba steps up for Jets.  Looks like the sophomore slump is over as he is heating up.  Byfuglien also gets mentioned in the article.

Illegal Curve:  Jets Power Play – Should we expect anything different?  Richard looked at the last three + seasons of the power play and examined the team’s poor power play.  Richard specifically took a look at the personnel that have made up the first power play unit.

Illegal Curve:  Coach Maurice scrum (audio).  Injury updates.  Big pile of bad news all at once.  Injury or illness?  Byfuglien moves back to D.  What does he want to see Byfuglien do in the game tomorrow to be viewed as a success?  Does Jacob Trouba play like someone in his sophomore season?  He seems upbeat despite all the bad news.  Does the way Chiarot played last night make treading water this month easier?  Spent a lot of time convincing Byfuglien to be a forward, does this undo that?  Is there anything that they asked him not to do from what they saw from his game on D previously?  Thoughts on Pardy/Postma’s game?  Does he feel comfortable leaning on them more?  Is this a critical test for his system?  Is Little good to go tomorrow? Who will be starting in net tomorrow?

TSN 1290 Winnipeg:  The Big Show (audio).  Shane Hnidy joins the guys to explain why Winnipeg can find success in playing ugly hockey, despite their continuing trend of sloppy wins over non-playoff teams.

Denver Post:  Alex Tanguay: “We keep finding ways to lose”.  Colorado continues to stumble and last night in Calgary was no exception as they blew a late lead and later lost in OT to the Flames.