Note:  Following last night’s 3-2 OT win the Jets return to the MTS Centre to practice for their game against the Avalanche tomorrow night.  As always stick with @illegalcurve for all the latest news.

Winnipeg Free Press:  Steady Pavelec sets stage for Winnipeg’s late rally, OT win.  These Jets sure know how to give their fans some heart pain.  Waiting till late in the game to tie things up.  While it wasn’t the prettiest of wins it add another important two points into the standings bank. 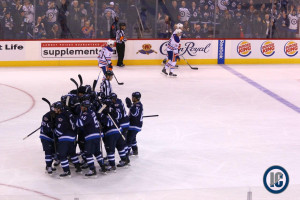 Winnipeg Free Press:  Jets’ perseverance pays off.  Paul breaks down the game including avoiding becoming the Oilers first Western Conference victory, asks where have the goals gone and ends with a look ahead for the Jets this week.

Winnipeg Free Press:  MacT should follow Chevy’s lead.  Clearly one of the big knocks against the Thrashers franchise was prematurely rushing prospects into the roster.  Gary makes the argument that the Oilers GM needs to show a bit more patience similar to that displayed by the Jets GM.

Edmonton Journal:  ‘Bring it on. It will not break me,’ Eakins says just before another Oilers’ loss.  There is not much joy in Oilerland these days.  A look at the game from the Jets opposition.

CBC:  Winnipeg woman challenges Evander Kane to donate to baby formula drive.  While there is no word if the Jets winger is going to donate hopefully she has been able to use this to raise awareness for her worthwhile cause.

Post-game Podcast:  Host Drew Mindell and analyst Richard Pollock break down the Jets play against the Oilers this evening.