Note:  Get ready for a busy December as the Jets face the Oilers at 8 pm tonight at the MTS Centre.  This is the first of nine games that will be played in Winnipeg this month.  Be sure to stick with our comprehensive coverage throughout the day and following the game.  As always ensure you follow @illegalcurve on twitter.

Note II:  Reminder that with the Jets game NHL Mid-Week will not be heard on TSN 1290 Winnipeg tonight.  The guys return to the airwaves on Saturday for the Illegal Curve Hockey Show starting at noon.

Winnipeg Free Press:  Under the Umbrella – How it works.  J.P. Vigier is at his whiteboard and today’s focus is the Jets power play.

Winnipeg Free Press:  Notebook.  Looking at three things 1) Little’s return 2) Chiarot rides in and 3) Chase is in the hunt.

Winnipeg Free Press:  Kane’s Instagram photo ‘all in good fun’.  I keep hearing that this is causing a buzz.  If so I must be asleep because this certainly hasn’t become the media storm being asserted by some.

Winnipeg Sun:  Jets gameday – Oilers a dangerous team.  Ken set up the first game in a few days for Winnipeg as the Jets face an Oilers team that hasn’t won a game since November 9th against the Rangers and have still not beaten a Western Conference team this season.  Article features a big matchup (Bogosian vs. Hall) and plenty of ice chips to get you ready for the game. 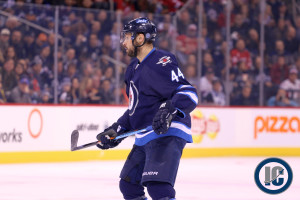 Winnipeg Sun:  Evander being Evander.  Another controversy?  Hardly.  I think if athletes have social media accounts then you cannot expect them to be robots.  Does this hurt anyone?

NHL.com:  Jets place Enstrom on IR, recall Chiarot.  The team sounded hopeful that they would have Enstrom back in time for tonight’s game.  The team will have to hope that he isn’t on the shelf for too much longer.

Global News:  Little could play big role against Oilers.  This team certainly doesn’t have the centre depth to last long with the loss of Little.  It sounds like he will be a player tonight, barring any setbacks.

Sportsnet:  Ranking the top goal songs in the NHL.  Ranked #19 in the league.  What are your thoughts on the Jets goal song?

CBC:  Kids vie to be Jets reporters.  Some of these kids could give us a run for our money in the post-game scrums.

Illegal Curve:  Coach Maurice scrum (audio).  On Evander Kane’s instagram picture.  How did Bryan Little and Tobias Enstrom look?  More on the instagram post.  On having power play success.  How dangerous can a team like the Oilers be?  Will Pavelec get the start tomorrow?  Have the players handed this mini-break?  What is Frolik’s status?  Comment on the Jets prospects who will be playing at World Juniors.  What has Craig Slaunwhite brought to the team (fitness).

TSN 1290 Winnipeg:  The Big Show (audio).  Craig Button joined the guys to discuss why he thinks Evander Kane’s latest Instagram picture shows the forward still has some growing up to do.

Edmonton Journal:  Eakins keeps brave face amid ugly situation.  Cannot be easy trying to guide what appears to be a sinking ship in E-town.

Edmonton Sun:  Teddy Purcell says it’s up to him and his teammates to turn team’s fortunes around.  The Jets are going to face a desperate Oilers team.  One they can certainly not afford to take lightly unless they want to become the first Western Conference victim of Edmonton.