Note:  The Jets resume practice today after taking the weekend off to heal their bumps and bruises.  We should have a better idea of Bryan Little’s status following practice today.  As always ensure you follow @illegalcurve on twitter for all the latest Jets news.

Winnipeg Free Press:  Little, Enstrom still ‘day to day’.  Fans are hoping that not playing until Wednesday will be enough time to heal for both players.

Winnipeg Sun:  Jets gain currency of hard work.  Paul writes about the transformation of this group under coach Paul Maurice, on the players buying into this system, a Little update and a look at prospect Nik Ehlers. 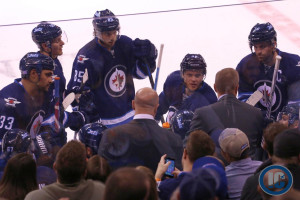 The Hockey News:  It’s Michael Hutchinson’s time to take the net from Ondrej Pavelec.  The “intervals” for which Hutchinson is getting starts sure seems to be shrinking but coach Maurice isn’t ready to supplant Pavelec as the team’s #1 goalie.

Vancouver Sun:  Giants name Claude Noel head coach.  Congrats to the former Jets bench boss who had a brief stint as an analyst for TSN last season after he was let go by Winnipeg.  I’m sure he will bring joy to joyland in his new coaching position in the WHL.

Yahoo Sports:  Jets pick Nikolaj Ehlers notches 6 points for Halifax.  Missed this the other day as the Jets 2014 1st round pick is continuing to tear it up lately.

TSN:  Projecting Canada’s WJHC roster – Final Edition.  TSN’s Director of Scouting Craig Button takes his turn prognosticating the final roster and Jets fans will be happy to see they have a prospect for each position on his list. We will know today the selection camp roster.