Note:  The final game of the road trip is tonight in Beantown at 6 pm as the Jets are looking to go a perfect three for three on the road when they take on the Bruins at the TD Garden Center.   Be sure to stick with our comprehensive coverage throughout the day and following the game.  As always ensure you follow @illegalcurve on twitter.

Note II:  The Illegal Curve Hockey Show will be on TSN 1290 Radio Saturday morning, at a special start time of 10:00 AM. Join Drew, Richard and Ezra as they recap the Jets-Bruins game. Confirmed guests include Ray Ratto of CSN Bay Area, to discuss the San Jose Sharks’ struggles, and in the “Saturday Spotlight”, Winnipeg Jets play-by-play broadcaster Dennis Beyak.

Note III:  Thankfully we are almost done Movember and Ezzy is about to conclude his quest to raise funds and awareness for this great cause on behalf of Illegal Curve.  Please donate to him here and help support Ez in this worthwhile endeavor.

Winnipeg Free Press:  Hutchinson – The Comeback Kid.  From the ECHL to the NHL, he has had quite the remarkable run.

Winnipeg Sun:  Jets should go back to red-hot Hutchinson for the game in Boston.  I can’t see coach Maurice doing it.  Not when he’s declared Pavelec his #1 goalie.  Just doesn’t seem kosher.  Ken makes the case for Hutchinson starting based both on performance and the connection that the goalie has to the Bruins. 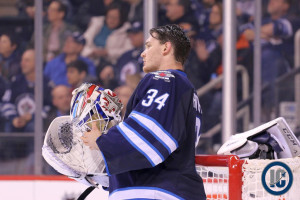 Winnipeg Sun:  Lowry gets off easy.  Paul talks about the hit that Lowry laid on the Sabres Kaleta and how he got off relatively unscathed. His column also touches on the fact that these Jets are not  Claude Noel’s Jets anymore and ends with the goalie debate.

TSN 1290 Winnipeg:  Frolik providing both offensive and defensive value for Jets.  Dennis writes his article on what the Czech forward has done for this team.  Also covers the Ladd/Little/Wheeler line, good goaltending in the central and defencemen ice time.

TSN 1290 Winnipeg:  The Big Show (audio).  After the Jets picked up their second straight win in their three-game road trip, Sean McIndoe joined the guys to put a little rain on the parade, explaining why the Jets are nothing more than an average club.

Boston Herald:  Peter Chiarelli’s OK with Bruins.  The B’s GM had an impromptu state of the Bruins address with reporters so get caught up on all things Bruins.

Boston Globe:  Chris Kelly likely to play for Bruins against Jets.  You see that laundry list of injured players and you realize just what Boston has had to deal with this season.